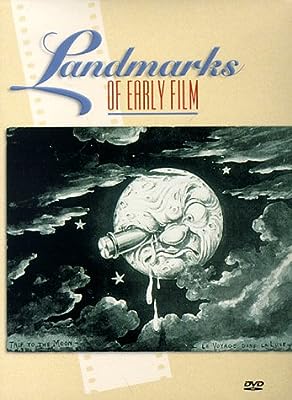 Price: $29.99
As of 2022-08-17 04:07:05 UTC (more info)
Product prices and availability are accurate as of 2022-08-17 04:07:05 UTC and are subject to change. Any price and availability information displayed on http://www.amazon.com/ at the time of purchase will apply to the purchase of this product.
Availability: Not Available - stock arriving soon
Buy Now from Amazon
Product Information (more info)
CERTAIN CONTENT THAT APPEARS ON THIS SITE COMES FROM AMAZON SERVICES LLC. THIS CONTENT IS PROVIDED 'AS IS' AND IS SUBJECT TO CHANGE OR REMOVAL AT ANY TIME.

A magnificent collection for anyone interested in the earliest days of film history, this compilation of films spans the years from 1886 to 1913, from the first experiments in "serial photography" to the emergence of narrative shorts and the dawn of the feature-length film. It's a veritable archive of nearly every important film from the birth of the medium, including Edison Kinestoscope films (1894-96), films by the brothers Lumière (1895-97), the magical movies of French special effects pioneer Georges Méliès, documentary "actualities" from 1897 to 1910, and selected short films from 1903 to 1913. The two-hour collection offers a fascinating study of how motion pictures quickly developed a variety of applications and a means of artistic and practical expression, with their own emerging language of camera style, editing, and cinematography. Watching these films is like stepping into a time machine to witness the infancy of motion pictures, which would rapidly evolve to become the most powerful medium of the 20th century prior to the development of television. --Jeff Shannon