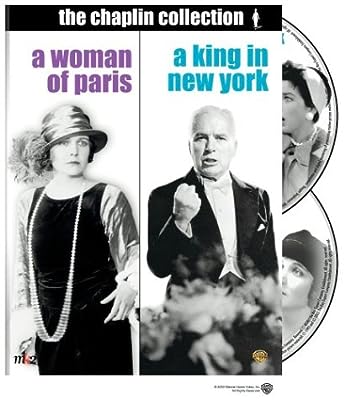 Price: $44.95
As of 2023-02-01 03:28:49 UTC (more info)
Product prices and availability are accurate as of 2023-02-01 03:28:49 UTC and are subject to change. Any price and availability information displayed on http://www.amazon.com/ at the time of purchase will apply to the purchase of this product.
Availability: Not Available - stock arriving soon
Buy Now from Amazon
Product Information (more info)
CERTAIN CONTENT THAT APPEARS ON THIS SITE COMES FROM AMAZON SERVICES LLC. THIS CONTENT IS PROVIDED 'AS IS' AND IS SUBJECT TO CHANGE OR REMOVAL AT ANY TIME.

Cinema immortal Charles Chaplin brings his talents to both sides of the camera in this deluxe double feature. The comedy king gives American pop culture and politics the royal treatment in the satiric, penultimate Chaplin film A King in New York. Advertising, movies, TV, rock music, celebrity and more are in Chaplin's comic sights as he portrays a deposed European monarch who becomes a U.S. media sensation. The acclaimed Silent-Era classic A Woman of Paris is Chaplin's first drama (a genre he visited again in Limelight). Directing with keen-eyed finesse and appearing in only a bit role, Chaplin jabs at French high society while telling a tale of tragic love. The early Chaplin. The later Chaplin. A remarkable genius infuses both in this special collector's compilation.

A King in New York
A King in New York, Charlie Chaplin's penultimate film--featuring his final starring performance--was made in 1957 but wasn't officially released in America until the '70s, when it, surprisingly enough, won an Oscar for Chaplin's score. What took so long? Thanks to his politics and unorthodox personal life, Chaplin was pretty roundly hated by the late '50s, but had the movie been better, someone might've brought it stateside sooner. Chaplin plays King Shahdov of Estrovia, on the lam when revolution grips his homeland. In New York, despite the occasional indignity, he's treated as royalty until he takes a stand against the commie-hunters, a plotline that hit way too close to home at the time (Chaplin, remember, was ahead of everyone in attacking Hitler when he made The Great Dictator). There's one inspired bit, as Shahdov orders dinner over the din of a supper club, but overall, the satire is strident, and Chaplin's takes on such things as technology and pop music make him look decidedly like an old fogey. --David Kronke

A Woman of Paris
At the height of his popularity, Charlie Chaplin chose to make a straight dramatic feature--without himself in a starring role. The plot of A Woman of Paris is perhaps not new: after a tragic misunderstanding, a small-town girl (former Chaplin paramour and longtime co-star Edna Purviance) goes to Paris and becomes the mistress of a rich playboy (Adolphe Menjou). But if the outline is familiar melodrama, the film still looks remarkable for its measured, adult attitude toward its characters; they are not black or white, but complicated, sophisticated shades of gray. Menjou, in particular, is a charming and thoroughly delightful cad. The film's matter-of-fact spirit on the subject of how adults conduct their sexual lives is also impressive. Critics loved the picture, but audiences did not, and Chaplin soon returned to comedy. He can be glimpsed, disguised, in a one-scene walk-through as a clumsy train porter. --Robert Horton