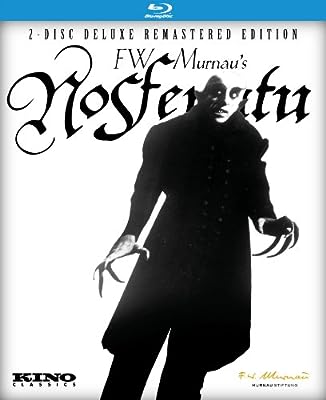 Price: $39.95
As of 2023-02-05 15:53:10 UTC (more info)
Product prices and availability are accurate as of 2023-02-05 15:53:10 UTC and are subject to change. Any price and availability information displayed on http://www.amazon.com/ at the time of purchase will apply to the purchase of this product.
Availability: Not Available - stock arriving soon
Buy Now from Amazon
Product Information (more info)
CERTAIN CONTENT THAT APPEARS ON THIS SITE COMES FROM AMAZON SERVICES LLC. THIS CONTENT IS PROVIDED 'AS IS' AND IS SUBJECT TO CHANGE OR REMOVAL AT ANY TIME.

To watch F.W. Murnau's 1922 German Expressionist masterpiece Nosferatu is to see the vampire movie before it became a trendy pop icon of commercials, jokes, skits, franchises, books and over 100 different films. Nosferatu's horror classic is the greatest of all vampire films, and its surreal and haunting tone and intensity gives off the feeling as if its creators were truly in awe of its material and that the legend of Dracula was a tale they believed in. Murnau's Nosferatu isn't necessarily scary but more a film to admire for its beautiful artistry and gothic atmosphere of distorted style, lighting and shadows. There are no cheap or sudden scares in the film and instead what truly frightens us are its creepy images, its hypnotic mood and its tortured creature, who has to live through a dreaded and horrific curse. Before movie industries concentrated on sex, blood and gore, the vampire genre was a film that created a nightmarish world which seemed to come from the repressed deep-rooted psyche of the human mind.

An unauthorized adaptation of Bram Stoker's Dracula, Nosferatu is the quintessential silent vampire film, crafted by legendary German director F. W. Murnau (Sunrise, Faust, The Last Laugh). Rather than depicting Dracula as a shape-shifting monster or debonair gentleman, Murnau's Graf Orlok (as portrayed by Max Schreck) is a nightmarish, spidery creature of bulbous head and taloned claws -- perhaps the most genuinely disturbing incarnation of vampirism yet envisioned. Nosferatu was an atypical expressionist film in that much of it was shot on location. While directors such as Lang and Lubitsch built vast forests and entire towns within the studio, Nosferatu's landscapes, villages and castle were actual locations in the Carpathian Mountains. Murnau was thus able to infuse the story with the subtle tones of nature: both pure and fresh as well as twisted and sinister. Remastered in high definition for the first time and making its Blu-ray debut exclusively from Kino Classics.

When Nosferatu was first released in 1922 the company Prana had to declare bankruptcy after Bran Stoker's widow Florence Stoker, sued for copyright infringement and won. The court ordered all existing prints of Nosferatu to be burned, but one copy of the film had already been distributed around the world. This print was duplicated over the years, kept alive by a cult following, making Nosferatu one of the first real cult films. Nosferatu is one of the key films of the German Expressionism movement which was an artistic style beginning in Germany before the first World War. Max Schreck's masterful portrayal of Dracula in Nosferatu was more demonic and similar to an animal than a human being. He has bat like ears, long rat like claws and fangs that sit in the middle of his mouse like a rodent. His walk and body movements are similar more to a spider waiting patiently to attack its prey. Film critic Roger Ebert describes Nosferatu saying, "It doesn't scare us, but it haunts us. It shows not that vampires can jump out of shadows, but that evil can grow there, nourished on death."