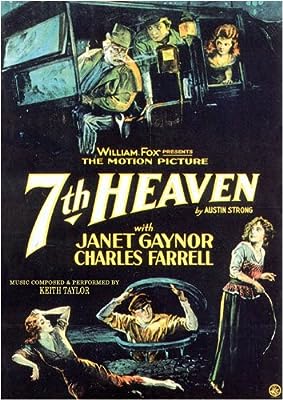 Price: $19.99
As of 2022-08-17 22:52:12 UTC (more info)
Product prices and availability are accurate as of 2022-08-17 22:52:12 UTC and are subject to change. Any price and availability information displayed on http://www.amazon.com/ at the time of purchase will apply to the purchase of this product.
Availability: Not Available - stock arriving soon
Buy Now from Amazon
Product Information (more info)
CERTAIN CONTENT THAT APPEARS ON THIS SITE COMES FROM AMAZON SERVICES LLC. THIS CONTENT IS PROVIDED 'AS IS' AND IS SUBJECT TO CHANGE OR REMOVAL AT ANY TIME.

On the eve of World War One - Two strangers will meet and discover more than they bargained for in the academy award winning 1927 classic 7th heaven. Chico (Charles Farrell) is a bold and brash sewer worker in Paris who comes to the rescue of the down and out Diane (Janet Gaynor). In a city full of loneliness and uncertainty Chico and Diane find a closeness they've never had before. There relationship is put to the test when Paris is bombed and Chico marches off to war. Directed by former actor Frank Borzage this is the first cinematic pairing for Farrell and Gaynor. There popularity at the time was so great that the two of them went on to do ten more films together concluding with the 1929 revue Happy Days.