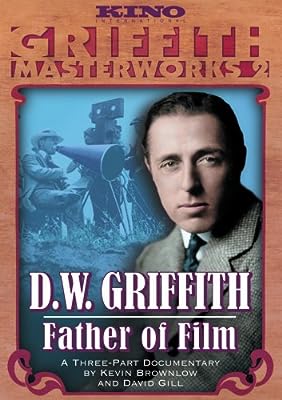 Price: $22.22
As of 2022-12-06 10:26:01 UTC (more info)
Product prices and availability are accurate as of 2022-12-06 10:26:01 UTC and are subject to change. Any price and availability information displayed on http://www.amazon.com/ at the time of purchase will apply to the purchase of this product.
Availability: Not Available - stock arriving soon
Buy Now from Amazon
Product Information (more info)
CERTAIN CONTENT THAT APPEARS ON THIS SITE COMES FROM AMAZON SERVICES LLC. THIS CONTENT IS PROVIDED 'AS IS' AND IS SUBJECT TO CHANGE OR REMOVAL AT ANY TIME.

In this acclaimed three-part documentary, celebrated film historians Kevin Brownlow and David Gill (Unknown Chaplin, Buster Keaton: A Hard Act to Follow) tell the proud, sad story of D.W. Griffith (1875-1948): the man who first brought artistry and ambition to the movies, and then, having dragged a reluctant American film industry to international prominence, found it had no more use for him. Judiciously chosen film clips illustrate exactly how, within seven years of going to work for the Biograph Studios in 1908, Griffith painstakingly refined camera and acting techniques; how trial and error led him to create a grammar that was the cinema s own; and how, in 1915, he presented the fully-fledged film masterwork The Birth of a Nation. Griffith strove to outdo himself in skill, spectacle and soaring ambition, and Brownlow and Gill illuminate the successes that highlighted his career: Intolerance, Broken Blossoms, Way Down East and Orphans of the Storm. A wealth of background detail is provided by vivid accounts of Griffith at work (from Lillian Gish, Blanche Sweet, Karl Brown, Stanley Cortez, among others), and by a comprehensive account of the great controversy sparked by The Birth of a Nation. With its extensive historic details and dazzling extracts from beautifully tinted prints, Brownlow and Gill s three-part documentary is the perfect reminder of just how great Griffith s achievements were. Notes by Tom Milne.