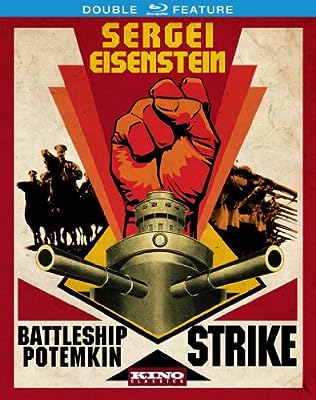 Price: $28.50
As of 2023-02-01 09:48:13 UTC (more info)
Product prices and availability are accurate as of 2023-02-01 09:48:13 UTC and are subject to change. Any price and availability information displayed on http://www.amazon.com/ at the time of purchase will apply to the purchase of this product.
Availability: Not Available - stock arriving soon
Buy Now from Amazon
Product Information (more info)
CERTAIN CONTENT THAT APPEARS ON THIS SITE COMES FROM AMAZON SERVICES LLC. THIS CONTENT IS PROVIDED 'AS IS' AND IS SUBJECT TO CHANGE OR REMOVAL AT ANY TIME.

DISC 1 - BATTLESHIP POTEMKIN: Odessa - 1905. Enraged with the deplorable conditions on board the armored cruiser Potemkin, the ship's loyal crew contemplates the unthinkable - mutiny. Seizing control of the Potemkin and raising the red flag of revolution, the sailors' revolt becomes the rallying point for a Russian populace ground under the boot heels of the Czar's Cossacks. When ruthless White Russian cavalry arrives to crush the rebellion on the sandstone Odessa Steps, the most famous and most quoted film sequence in cinema history is born. SPECIAL FEATURES: ''Tracing Battleship Potemkin,'' a 42-minute documentary on the making and restoration of the film, The restored film with newly-translated English intertitles, The restored film with original Russian intertitles (and optional English subtitles), The original 1926 Edmund Meisel score, performed by the Deutsches Filmorchestra (presented in DTS-HD Master Audio 5.1), Photo galleries

DISC 2 - STRIKE: The first feature film by the director of Battleship Potemkin, Sergei Eisenstein's STRIKE is a visual tour-de-force that employs dynamic editing and experimental camerawork to dramatize the saga of a bitterly-fought factory strike in 1903. Often compared to Citizen Kane in terms of audacious directorial debuts, STRIKE embodies the revolutionary spirit of the Soviet people of the 1920s, cresting the waves of artistic and political idealism. This edition of STRIKE was mastered in HD from a 35mm film element restored by the Cinematheque de Toulouse, with a newly-recorded score by the Mont Alto Motion Picture Orchestra, adapted largely from the works of traditional Russian composers. SPECIAL FEATURES: GLUMOV'S DIARY (1923, 4 min.) For years considered lost, Eisenstein's first film is a playful experimental short made for his stage production of Alexander Ostrovsky's Enough Stupidity in Every Wise Man, EISENSTEIN AND THE REVOLUTIONARY SPIRIT (2008, 37 min.) Film historian Natacha Laurent places Eisenstein's work in the context of the Communist Revolution and contemporary Soviet filmmaking.