Tunes of Glory (The Criterion Collection) 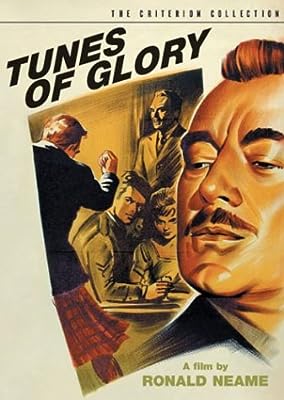 Price: $18.01
As of 2022-12-09 12:08:05 UTC (more info)
Product prices and availability are accurate as of 2022-12-09 12:08:05 UTC and are subject to change. Any price and availability information displayed on http://www.amazon.com/ at the time of purchase will apply to the purchase of this product.
Availability: Not Available - stock arriving soon
Buy Now from Amazon
Product Information (more info)
CERTAIN CONTENT THAT APPEARS ON THIS SITE COMES FROM AMAZON SERVICES LLC. THIS CONTENT IS PROVIDED 'AS IS' AND IS SUBJECT TO CHANGE OR REMOVAL AT ANY TIME.

In Ronald Neame's Tunes of Glory, the incomparable Alec Guinness inhabits the role of Jock Sinclair-a whiskey drinking, up-by-the-bootstraps commanding officer of a peacetime Scottish battalion. When Basil Barrow (John Mills)-an educated, by-the-book scion of a traditionally military family-enters the scene as Sinclair's replacement, the two men become locked in a fierce battle for control of the battalion and the hearts and minds of its men. Based on the novel by James Kennaway and featuring flawless performances by Guinness and Mills, Tunes of Glory uses the rigidly stratified hierarchy of military life as a jumping off point to examine the institutional contradictions and class divisions of English society, resulting in an unexpectedly moving drama. The DVD features new interviews with Ronald Neame and John Mills, the theatrical trailer, and more.

Venerable British actors Alec Guinness and John Mills give two of their finest performances in Tunes of Glory, a compelling, emotionally charged study of leadership in a peacetime Scottish battalion. In one of his most memorable roles, Guinness plays Jock Sinclair, the brash, red-haired colonel who temporarily commands his regiment of loyal, devoted soldiers. He's quick with a drink and hearty tales of military bravado, placing him in fun-loving contrast to his replacement, Col. Barrow (Mills), a hot-tempered martinet whose by-the-book style couldn't be more different, or less likable, than Sinclair's. In adapting his own novel for director Ronald Neame, James Kennaway keenly establishes the psychological opposition of these two stubborn men, demonstrating the equal merit of their military careers while exploring class distinctions and, ultimately, the inevitable tragedy of their failure to reach a mutual understanding. Ironically, Guinness was originally offered Mills's role, but suggested a switch to avoid comparison to his role in The Bridge on the River Kwai. It was an inspired decision, allowing each actor to shine in a timeless film that speaks volumes about military men and the winning (or losing) of hearts and minds. --Jeff Shannon

Taste of Cherry (The Criterion Collectio...