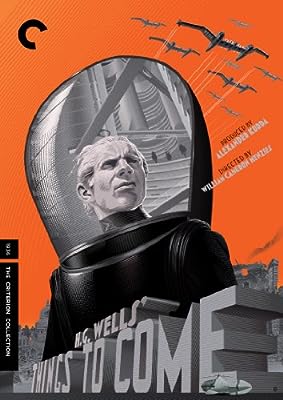 Price: $18.01
As of 2023-02-08 02:54:11 UTC (more info)
Product prices and availability are accurate as of 2023-02-08 02:54:11 UTC and are subject to change. Any price and availability information displayed on http://www.amazon.com/ at the time of purchase will apply to the purchase of this product.
Availability: Not Available - stock arriving soon
Buy Now from Amazon
Product Information (more info)
CERTAIN CONTENT THAT APPEARS ON THIS SITE COMES FROM AMAZON SERVICES LLC. THIS CONTENT IS PROVIDED 'AS IS' AND IS SUBJECT TO CHANGE OR REMOVAL AT ANY TIME.

A landmark collaboration between writer H. G. Wells (Island of Lost Souls), producer Alexander Korda (The Thief of Bagdad), and designer and director William Cameron Menzies (Gone with the Wind), Things to Come is a science fiction film like no other, a prescient political work that predicts a century of turmoil and progress. Skipping through time, Things to Come bears witness to world war, dictatorship, disease, the rise of television, and finally, utopia. Conceived, written, and overseen by Wells himself as an adaptation of his own work, this megabudgeted production, the most ambitious ever from Korda’s London Films, is a triumph of imagination and technical audacity.

This Is Spinal Tap (The Criterion Collec...