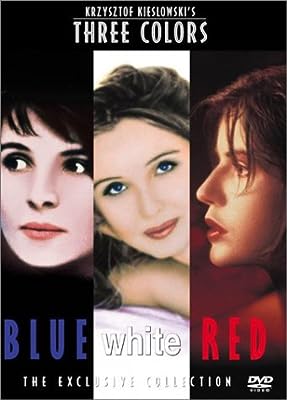 Price: $39.99
As of 2022-10-04 02:52:11 UTC (more info)
Product prices and availability are accurate as of 2022-10-04 02:52:11 UTC and are subject to change. Any price and availability information displayed on http://www.amazon.com/ at the time of purchase will apply to the purchase of this product.
Availability: Not Available - stock arriving soon
Buy Now from Amazon
Product Information (more info)
CERTAIN CONTENT THAT APPEARS ON THIS SITE COMES FROM AMAZON SERVICES LLC. THIS CONTENT IS PROVIDED 'AS IS' AND IS SUBJECT TO CHANGE OR REMOVAL AT ANY TIME.

Blue: The thematic and creative ideas that are in Three Colors: Blue are artistically challenging as the audience is to emphasize and understand Julie, a woman who chooses to erase all traces of her former life, disconnecting herself psychically and emotionally from family and friends. Immediately in the opening sequence of the film, her husband (who is a world-famous music composer) and daughter are killed in a car crash. After a slow recovery, Julie attempts suicide which is unsuccessful, and ultimately she decides to annihilate her entire personal history by removing all the materialistic possessions that made her who she once was. This form of liberation from her former self will have the audience empathize with her transformation, but her husband’s music will transport Julie back to the creativity of her dead family, and will have her discover an unknown part of her husband’s existence that she never knew he had.

White: Three Colors: White is Krzysztof Kieslowski’s center film of his Three Color trilogy, and if it isn't the oddest of the three, it is definitely the most underrated and sublime. The Three Color Trilogy corresponds to the three hues of the French tricolor, and also to the French national principles of liberty, equality, and fraternity. White, is generally said to be an anti-comedy, just as Blue is said to be an anti-tragedy, and Red is an anti-romance. Krzysztof's darkly humorous and sardonic Three Colors: White tells the story of a sexually potent Polish hairdresser who has reached the bottom of the barrel and pathetically tries to make money by performing in the Paris Metro by using his pocket comb as an instrument to inspire donations. He has barely survived a humiliating divorce, and is so desperately homesick in Paris that he devises a plan to be sent back to Warsaw by curling up in inside a suitcase.

Red: For me, Three Colors: Red is the greatest of all the three films, a poetically rich and perfectly constructed story of coincidence, chance and fate, that can be embraced as equally as a stand alone film, or the concluding ending to one of the greatest cinematic trilogies in the world.  The story of Three Colors: Red is of a young model and university student named Valentine, who accidentally hits a dog with her car, thus beginning a strange and complex relationship with its owner, a retired and bitter judge played by the extraordinary actor Jean-Louis Trintignant. Unlike other third installments in trilogies, Three Color: Red doesn't necessarily bring the other films to a close, and instead seems to ambiguously lead all three films to a larger whole, as all of its key players will grow from an isolated alienation to a heightened sense to their links to one another and of their profound place in the world.

Miramax Home Entertainment is proud to present BLUE, WHITE and RED, the acclaimed films by director Krzysztof Kieslowski. Hailed by filmgoers as some of the most absorbing, engaging, well-crafted dramas in recent memory, the box set of BLUE, WHITE and RED Each DVD disc includes lengthy bonus features.

BLUE: Academy Award winner Juliette Binoche ("The English Patient," Best Supporting Actress, 1996) stars as a young woman left devastated by the unexpected death of her husband and child. She retreats into the world around her, but is soon reluctantly drawn into an ever-widening web of lies and passion as the dark, secret life of her husband begins to unravel.

WHITE: Sexy Julie Delpy ("Before Sunrise") stars in a mysterious tale of a man whose life disintegrates when his beautiful wife of six months deserts him. Forced to begin anew, he rebuilds his life, only to plan a dangerous scheme of vengeance against her. Winner of the Best Director Award at the Berlin Film Festival.

RED: Irene Jacob ("The Double Life of Veronique") stars as a young model whose chance meeting with an unusual stranger leads her down a path of intrigue and secrecy. As her knowledge of the man deepens, she discovers an astonishing link between his past and her destiny.

Even though one can view each segment of Krzysztof Kieslowski's Three Colors trilogy on its own, it seems absurd to do so; why buy the slacks instead of the entire suit? Created by Kieslowski and his writing partner Krzysztof Piesiewicz for France's bicentennial, the titles--and the themes of the films--come from the three colors of the French flag representing liberty, equality, and fraternity. Blue examines liberation through the eyes of a woman (Juliette Binoche) who loses her husband and daughter in an auto accident, and solemnly starts anew. White is an ironic comedy about a befuddled Polish husband (Zbigniew Zamachowski) who takes an odd path of revenge against his ex-wife (Julie Delpy). A Swiss model (Irène Jacob) strikes up a friendship with a retired judge (Jean-Louis Trintignant) who eavesdrops on his neighbors in Red. The trilogy is a snapshot of European life at a time of reconstruction after the Cold War, reflected through Kieslowski's moralist view of human nature and illumined by each title's palate color.

The DVD set has numerous extras spread throughout the three discs; the end result is a superior collection. Each disc has a short retrospective, culled together from new interviews with Kieslowski's crew, plus film critic Geoff Andrew, biographer Annette Insdorf (who also does the commentaries), and fellow Polish director Ageniska Holland. Producer Marin Karmitz also reminisces about the experience. There's an exceptional effort to show the magic of Kieslowski (who died two years after the trilogy) through a discussion of his various career phases, interviews with the three lead actresses, four student films, and archival materials including simple--and wonderful--glimpses of the director at work. Excellent insight is also provided by Dominique Rabourdin's filmed "cinema lessons" with Kieslowski. Without viewing any of his other films, this set illustrates the uniqueness of Kieslowski. --Doug Thomas

In 1989, the Communist rule that had dominated Eastern Europe since the end of the Second World War collapsed with astonishing rapidity. In a remarkable burst of creative and artistic energy from 1988 to 1998, Polish and French cinema came together as director Krzysztof Kieslowski directed fourteen films, including The Three Color Trilogy, a feat for which there are few parallels in the history of the cinema. Kieslowski in this period went from being a well-respected filmmaker within his own country to being one of the all time greats of world cinema, now being listed with the same recognition as other legendary film directors like Bergman, Ozu, Bunuel, Fellini, Ford, Bresson or Chaplin. The Three Color Trilogy itself almost defies belief, as it was written, shot, and edited in less than three years, screening in succession at Venice, Berlin and Cannes, so that for one year, Kieslowski completely dominated art-cinema as no one ever had, or likely ever will again. Shortly after Three Colors: Red Kieslowski's announced his retirement, tragically dying of heart failure in 1996 at the young age of 54. With just a short span of films, Kieslowski has created some of the most spiritual and life affirming films in the world, often dealing with such existential and transcending themes as illness, death, loss and morality.