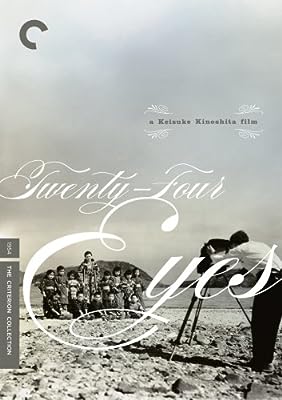 Price: $18.01
As of 2022-11-29 12:35:15 UTC (more info)
Product prices and availability are accurate as of 2022-11-29 12:35:15 UTC and are subject to change. Any price and availability information displayed on http://www.amazon.com/ at the time of purchase will apply to the purchase of this product.
Availability: Not Available - stock arriving soon
Buy Now from Amazon
Product Information (more info)
CERTAIN CONTENT THAT APPEARS ON THIS SITE COMES FROM AMAZON SERVICES LLC. THIS CONTENT IS PROVIDED 'AS IS' AND IS SUBJECT TO CHANGE OR REMOVAL AT ANY TIME.

Keisuke Kinoshita's Twenty-Four Eyes (Nijushi no hitomi) is an elegant, emotional chronicle of a teacher s unwavering commitment to her students, her profession, and her sense of morality. Set in a remote, rural island community and spanning decades of Japanese history, from 1928 through World War II and beyond, Kinoshita's film takes a simultaneously sober and sentimental look at the epic themes of aging, war, and death, all from the lovingly intimate perspective of Hisako Oshi (Hideko Takamine), as she watches her pupils grow and deal with life's harsh realities. Though little known in the United States, Twenty-Four Eyes is one of Japan's most popular and enduring classics.

SPECIAL EDITION FEATURES:New, restored high-definition digital transfer, New video interview with Japanese cinema historian and critic Tadao Sato about the film and its director, New and improved English subtitle translation.
PLUS: A booklet featuring a new essay be renowned film scholar Audie Bock and excerpts from an interview with Kinoshita

Sentimental yet clear-eyed, Keisuke Kinoshita's Twenty-Four Eyes tracks the lives of 12 students through the perspective of one teacher. When Hisako Oishi (Hideko Takamine, a favorite of Kinoshita and Mikio Naruse) arrives in Shodoshima in 1928, the island’s townspeople take umbrage at her modern suit and "shiny new bike," but Oishi's charm and dedication wins them over in the end. About her charges, she tells her mother, "I don't want those adorable eyes to ever lose their sparkle." Though Oishi means "big stone," the first-graders--five boys and seven girls--call her Miss Pebble due to her petite stature. As the years pass, some of the students leave school to work, while the now-married instructor encourages the boys to consider non-military options. Though she isn't a "Red," Mrs. Oishi subscribes to pacifism and free thought. Similarly, Twenty-Four Eyes doesn't advance a political agenda, but rather a humanist one. As Audie Bock (Japanese Film Directors) notes, Kinoshita placed a high value on "innocence, purity, and beauty," and even after two decades of hardship, his heroine never loses faith in the essential goodness of people.

Though Sakae Tsuboi's 1952 novel inspired a 1987 remake, Kinoshita's film stands as the definitive adaptation. A classic in its native country, this 1954 feature shares the same timeless values as All Quiet on the Western Front and Goodbye, Mr. Chips. Extras include an interview with Tadao Sato (Currents in Japanese Cinema), two trailers, and a booklet with commentary from the director and an essay by Bock. --Kathleen C. Fennessy

There Will Be Blood

Talk to Her (Hable con Ella)

Taste of Cherry (The Criterion Collectio...