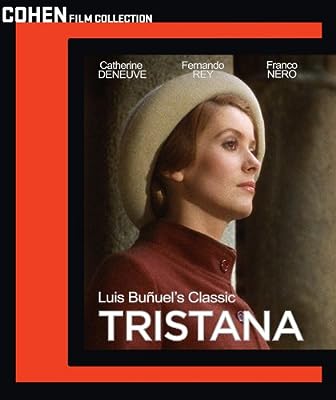 Price: $17.99
As of 2023-02-06 03:59:03 UTC (more info)
Product prices and availability are accurate as of 2023-02-06 03:59:03 UTC and are subject to change. Any price and availability information displayed on http://www.amazon.com/ at the time of purchase will apply to the purchase of this product.
Availability: Not Available - stock arriving soon
Buy Now from Amazon
Product Information (more info)
CERTAIN CONTENT THAT APPEARS ON THIS SITE COMES FROM AMAZON SERVICES LLC. THIS CONTENT IS PROVIDED 'AS IS' AND IS SUBJECT TO CHANGE OR REMOVAL AT ANY TIME.

A newly restored and rediscovered classic from master of cinema Luis Buñuel. Tristana has been called the director s most Spanish film and was nominated for a Best Foreign Film Oscar® in 1970. After the death of her mother, Tristana (Catherine Deneuve) goes to live with her guardian, Don Lope (Fernando Rey), an older man who eventually breaks through his façade of respectability and seduces her. She repays him a hundred fold, preying on his jealousy and taunting him with perverse whimsies.