The Taking of Power by Louis XIV (The Criterion Collection) 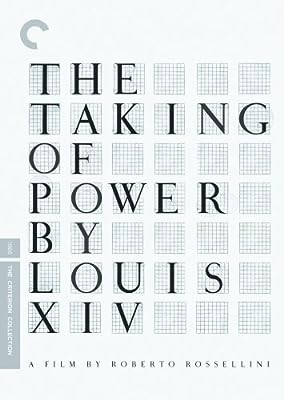 Price: $199.00
As of 2022-10-03 02:07:34 UTC (more info)
Product prices and availability are accurate as of 2022-10-03 02:07:34 UTC and are subject to change. Any price and availability information displayed on http://www.amazon.com/ at the time of purchase will apply to the purchase of this product.
Availability: Not Available - stock arriving soon
Buy Now from Amazon
Product Information (more info)
CERTAIN CONTENT THAT APPEARS ON THIS SITE COMES FROM AMAZON SERVICES LLC. THIS CONTENT IS PROVIDED 'AS IS' AND IS SUBJECT TO CHANGE OR REMOVAL AT ANY TIME.

Filmmaking legend Roberto Rossellini brings his passion for realism and unerring eye for the everyday to this portrait of the early years of the reign of France s Sun King, and in the process reinvents the costume drama. The death of chief minister Cardinal Mazarin, the construction of the palace at Versailles, the extravagant meals of the royal court: all are recounted with the same meticulous quotidian detail that Rossellini brought to his contemporary portraits of postwar Italy. The Taking of Power by Louis XIV dares to place a larger-than-life figure at the level of mere mortal.
SPECIAL EDITION FEATURES:
New, restored digital transfer
Taking Power, a multimedia essay by Tag Gallagher, author of The Adventures of Roberto Rossellini
The Last Utopia, a documentary about Rossellini s late career
Video interview with artistic advisor Jean Dominique de la Rochefoucauld and script supervisor Michelle Podroznik
Video interview with Renzo Rossellini
New and improved English subtitle translation
PLUS: A new essay by critic Colin McCabe