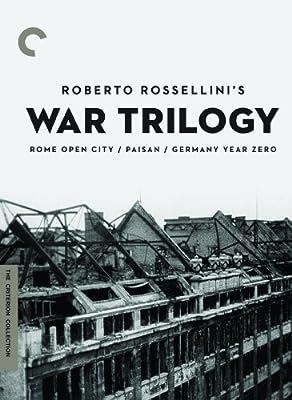 Price: $79.95
As of 2020-07-11 10:04:40 UTC (more info)
Product prices and availability are accurate as of 2020-07-11 10:04:40 UTC and are subject to change. Any price and availability information displayed on http://www.amazon.com/ at the time of purchase will apply to the purchase of this product.
Availability: Not Available - stock arriving soon
Buy Now from Amazon
Product Information (more info)
CERTAIN CONTENT THAT APPEARS ON THIS SITE COMES FROM AMAZON SERVICES LLC. THIS CONTENT IS PROVIDED 'AS IS' AND IS SUBJECT TO CHANGE OR REMOVAL AT ANY TIME.

Along with Vittoria De Sica's masterpiece Bicycle Thieves, Rome, Open City is considered the quintessential example of the Italian neo realism movement. The great Italian director Roberto Rossellini created not only a film of such powerful documentary like realism but also a film that can be viewed at as a groundbreaking work of historical importance for its time. Neorealism, as a term, can mean several things; it often refers to films of working class life and of the struggles and social conditions of people set in the culture of poverty. Rome, Open City was written by the legendary director Federico Fellini before he made his great mark in Italian film history, as its story is based on several true events in which a resistance leader is being hunted down by the Gestapo during the Nazi occupation of Rome during World War II. With help from allies and a loyal priest who is secretly helping the resistance, he plans to flee Rome and to get to safety under a new identity.

Roberto Rossellini is one of the most influential filmmakers of all time. And it was with his trilogy of films made during and after World War II ROME OPEN CITY, PAISAN, and GERMANY GROUND ZERO that he left his first transformative mark on cinema. With their stripped-down aesthetic, largely nonprofessional casts, and unorthodox approaches to storytelling, these intensely emotional works were international sensations and effectively launched the neorealist movement. Shot in battle-ravaged Italy and Germany, these three films are some of our most lasting, humane documents of devastated postwar Europe, containing universal images that encompass both tragedy and hope.

The Allies had barely driven the Nazis out of Rome when Roberto Rosselini went to work on Open City, considered by most to be his greatest work. Shot on bits and short ends of scavenged film, this film helped define Italian neorealism. Audiences were convinced that the actors were all amateurs (they weren't) and the whole film was improvised (it wasn't; the three screenwriters included Federico Fellini). With its semi documentary camera style and use of actual locations, the film does feel very real. Of course, so does the opening half-hour of Saving Private Ryan, and like that film Open City is at its heart a classic war yarn any Hollywood studio would feel at home with. The story involves members of the Italian underground trying to smuggle badly needed cash out of Nazi-occupied Rome to partisan fighters in the mountains, while the Nazis are hunting down one of the underground, a notorious freedom fighter and seditionist. Anna Magnani (an actor well established in her own country who became an international star with this film) is often singled out for her portrayal as the pregnant, unwed woman who gets caught up in the action on her wedding day, but the entire cast is topnotch. The sparse subtitles are both a blessing and a curse--there is less to read, which allows the viewer to concentrate on the visuals, but there are times when non-Italian-speakers will feel like they're missing out on some juicy dialogue. --Geof Miller

Rossellini had been making films under the Fascist regime for years and yet was still able to produce stories that portrayed the intelligence, strength and hope of a liberated Italy. Rossellini originally wanted to make the story into two small documentaries but was later suggested to combine the idea and make a feature film. To be able to make the film at time when there was hardly any film industry left in Italy, no money to fund the project and just two months after the Allies had forced the Nazis to evacuate the city of Rome, is extraordinary. The devastation that was the result of the war surrounded Rossellini, Fellini and Sergio Amidei, as they wrote the script for the film, and they declared publicly that the film would be a history of the Roman people under Nazi occupation. The films honest treatment of war, torture, martyrdom and violence quickly moved audiences and it is now looked at as one of the most powerful war films ever made. In one of the most infamous scenes of the film the character of Pina getting shot and killed in the middle of the streets while chasing after her fiancée after he's been abducted by the Gestapo, is based on the real story of Teresa Gullace who was killed by the Germans in front of the barracks on viale Giulio Cesare.