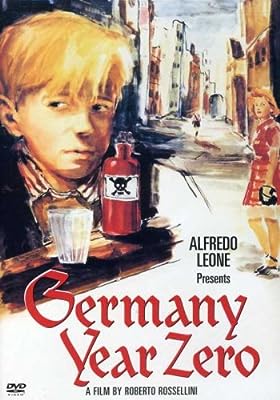 Price: $29.99
As of 2023-02-04 20:20:04 UTC (more info)
Product prices and availability are accurate as of 2023-02-04 20:20:04 UTC and are subject to change. Any price and availability information displayed on http://www.amazon.com/ at the time of purchase will apply to the purchase of this product.
Availability: Not Available - stock arriving soon
Buy Now from Amazon
Product Information (more info)
CERTAIN CONTENT THAT APPEARS ON THIS SITE COMES FROM AMAZON SERVICES LLC. THIS CONTENT IS PROVIDED 'AS IS' AND IS SUBJECT TO CHANGE OR REMOVAL AT ANY TIME.

Citizens fight for survival in the nightmarish devastation of post-World War II Berlin in this towering masterpiece of Italian neorealist cinema from groundbreaking director Robert Rossellini. Twelve-year-old Edmund, a child who has known only upheaval and terror, wanders from day to day trying to help his family and find money or food on the streets. One day he meets his former schoolteacher, who now profits from Nazi propaganda, and sets in motion a shocking new chain of violence. Filled with haunting imagery and unforgettable performances by real local citizens, this unflinching look at a country wracked with guilt and confusion will never leave your memory.