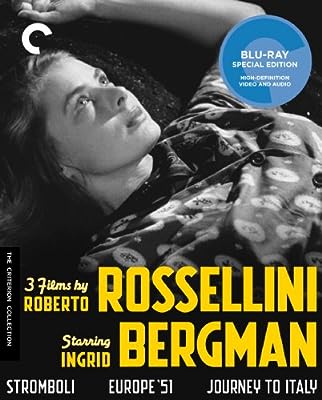 Price: $79.99
As of 2023-02-04 18:52:26 UTC (more info)
Product prices and availability are accurate as of 2023-02-04 18:52:26 UTC and are subject to change. Any price and availability information displayed on http://www.amazon.com/ at the time of purchase will apply to the purchase of this product.
Availability: Not Available - stock arriving soon
Buy Now from Amazon
Product Information (more info)
CERTAIN CONTENT THAT APPEARS ON THIS SITE COMES FROM AMAZON SERVICES LLC. THIS CONTENT IS PROVIDED 'AS IS' AND IS SUBJECT TO CHANGE OR REMOVAL AT ANY TIME.

In the late 1940s, the incandescent Hollywood star Ingrid Bergman (Casablanca) found herself so moved by the revolutionary neorealist films of Roberto Rossellini (Rome Open City) that she sent the director a letter, introducing herself and offering her talents. The resulting collaboration produced a series of films that are works of both sociopolitical concern and metaphysical melodrama, each starring Bergman as a woman experiencing physical dislocation and psychic torment in postwar Italy. It also famously led to a scandalous affair and eventual marriage between filmmaker and star, and the focus on their personal lives in the press unfortunately overshadowed the extraordinary films they made together. Stromboli, Europe ’51, and Journey to Italy are intensely personal portraits that reveal the director at his most emotional and the glamorous actor at her most anguished, and that capture them and the world around them in transition.

The first collaboration between Roberto Rossellini and Ingrid Bergman is a devastating portrait of a woman’s existential crisis, set against the beautiful and forbidding backdrop of a volcanic island. After World War II, a Lithuanian refugee (Bergman) marries a simple Italian fisherman (Mario Vitale) she meets in a prisoner of war camp and accompanies him back to his isolated village on an island off the coast of Sicily. Cut off from the world, she finds herself crumbling emotionally, but she is destined for a dramatic epiphany. Balancing the director’s trademark neorealism (exemplified here in a remarkable depiction of the fishermen’s lives and work) with deeply felt melodrama, Stromboli is a revelation.