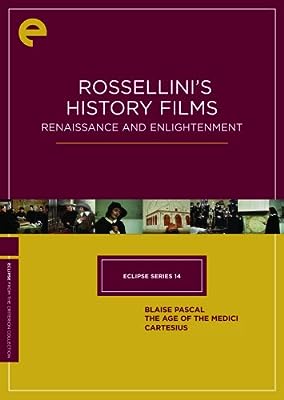 Price: $36.03
As of 2023-02-04 20:27:02 UTC (more info)
Product prices and availability are accurate as of 2023-02-04 20:27:02 UTC and are subject to change. Any price and availability information displayed on http://www.amazon.com/ at the time of purchase will apply to the purchase of this product.
Availability: Not Available - stock arriving soon
Buy Now from Amazon
Product Information (more info)
CERTAIN CONTENT THAT APPEARS ON THIS SITE COMES FROM AMAZON SERVICES LLC. THIS CONTENT IS PROVIDED 'AS IS' AND IS SUBJECT TO CHANGE OR REMOVAL AT ANY TIME.

In the final phase of his career, Italian master Roberto Rossellini embarked on a dramatic, daunting project: a series of television films about knowledge and history, made in an effort to teach, where contemporary media were failing. Looking at the Western world's major figures and moments, yet focusing on the small details of daily life, Rossellini was determined not to recount history but to relive it, as it might have been, unadorned but full of the drama of the everyday. This selection of Rossellini's history films presents THE AGE OF THE MEDICI, CARTESIUS, and BLAISE PASCAL works that don't just enliven the past but illuminate the ideas that brought us to where we are today.

THE AGE OF THE MEDICI
Roberto Rossellini 1973
Rossellini's three-part series is like a Renaissance painting come to life: a portrait of fifteenth-century Florence, ruled by the Medici political dynasty. With a lovely score from composer Manuel de Sica, this grand yet intimate work is a storybook conjuring of a way of life and thought.

CARTESIUS
Roberto Rossellini 1974
As profoundly simple as its hero's famous statement 'I think, therefore I am,' Roberto Rossellini's CARTESIUS is an intimate, psychological study of obsession and existential crisis.

BLAISE PASCAL
Roberto Rossellini 1972
In this evocative, atmospheric biography, Roberto Rossellini brings to life philosopher and mathematician Blaise Pascal, who, amid religious persecution and ignorance, believed in a harmony between God and science.