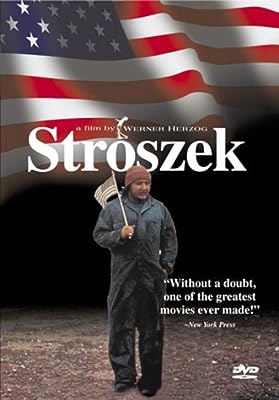 Price: $19.98
As of 2022-08-14 23:08:04 UTC (more info)
Product prices and availability are accurate as of 2022-08-14 23:08:04 UTC and are subject to change. Any price and availability information displayed on http://www.amazon.com/ at the time of purchase will apply to the purchase of this product.
Availability: Not Available - stock arriving soon
Buy Now from Amazon
Product Information (more info)
CERTAIN CONTENT THAT APPEARS ON THIS SITE COMES FROM AMAZON SERVICES LLC. THIS CONTENT IS PROVIDED 'AS IS' AND IS SUBJECT TO CHANGE OR REMOVAL AT ANY TIME.

In one of the most strangest and fascinating art films ever made, Werner Herzog's Stroszek tells the simple story of a mentally disabled ex-con, a tiny quirky best friend and a girlfriend who is a prostitute, who all three decide to leave Germany and begin a new life in a trailer house in Wisconsin; Which Herzog purposely shot in the hometown of serial killer Ed Gein. Not only would Herzog decide to cast the roles of the townspeople with the real town locals, but he would also cast a non-actor named Bruno Scheinstein as the lead character. Bruno's lifestory is as strange and sad as the story itself, as he was born the son of a prostitute and incarcerated in a mental institution from most of his early life.

Bruno Stroszek is released from prison and ekes out a living as a street musician. He befriends Eva, a prostitute down on her luck. After they are harried and beaten by Eva's pimps, they join Bruno's neighbor, Scheitz, an elderly eccentric, when he leaves Germany to live in Wisconsin in search of the American dream.

Stroszek is one of Werner Herzog's most accessible films, and one of his best. Herzog's clever use of kitschy folk music is just one perfect element in this mesmerizing, seriocomic "ballad" of America, in which a trio of unlikely friends leave their dreary lives in Berlin, certain that wealth and comfort await in America. Their naive American dream turns sour in rural Wisconsin, and the title character (played by Bruno S., the fascinating nonactor from Herzog's The Enigma of Kaspar Hauser) becomes an insanely tragic figure, celebrating a bitterly absurd Thanksgiving in the film's unforgettable closing scenes. By fusing his own intuitive, enigmatic style with factual details from the life of Bruno S., Herzog captures the elusive "ecstatic truth" that motivates his enduring cinematic vision. While deepening one of the most unusual actor-director collaborations in the history of film, Stroszek presents an American nightmare that's funny, bizarre, and deeply, magnificently human. --Jeff Shannon

The screenplay for Stroszek was written quickly in four days as Herzog already had the location of Plainfield, Wisconsin in mind. There, Herzog had planned to meet documentary filmmaker Errol Morris to dig up serial killer Ed Gein's mother's grave, but Morris never showed. Fortunately for Herzog his car broke down which led him to meet the mechanic whose character and shop later become major parts in the story. There are several beautiful and humanistic moments in the film, whether its the extraordinary shot of the Fleet-wood home being towed off the land leaving Bruno all alone to helplessly stare at the empty cold Wisconsin landscape, the infamous 'dancing chicken' ending, which shows a montage of a chicken dancing, a chicken playing a piano and a rabbit riding a toy fire truck.