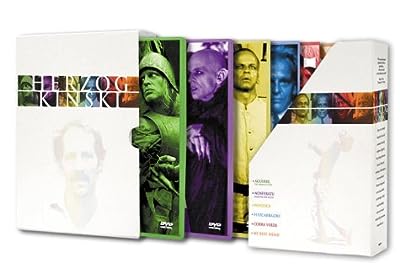 Price: $249.75
Availability: Not Available - stock arriving soon
Buy Now from Amazon
Product Information (more info)
CERTAIN CONTENT THAT APPEARS ON THIS SITE COMES FROM AMAZON SERVICES LLC. THIS CONTENT IS PROVIDED 'AS IS' AND IS SUBJECT TO CHANGE OR REMOVAL AT ANY TIME.


The six-film Herzog/Kinski boxed set is a sleek compilation of a visionary cinematic collaboration. The history of cinema is dotted with great directors who have found an actor whose face, voice, and style capture that director's point of view: Josef Von Sternberg and Marlene Dietrich; John Ford and John Wayne; Martin Scorsese and Robert DeNiro. In 1972, the German director Werner Herzog cast Polish actor Klaus Kinski in Aguirre, the Wrath of God--the result was perhaps the definitive film for both. Kinski had previously made almost 100 films, but his malevolent role--as a Spanish conquistador obsessed with finding gold--shot him into international stardom. Though Herzog and the volatile Kinski were at each other's throats through much of the filming, seven years later the director cast Kinski as the tortured vampire of Nosferatu, Phantom of the Night (a color remake of the silent horror classic) and the title character of Woyzeck, based on the classic expressionistic German play about a jealous, unstable soldier who murders his lover. Both films continued the Herzog-Kinski trademark of intense unflinching emotion and the palpable presence of the raw physical world.

In 1982, Fitzcarraldo carried this ethos to new heights as Kinski portrayed a man who, in order to bring grand opera to the depths of Peru, has a huge steamship hauled over a mountainside using ropes, pulleys, and human endurance. The mad ambition of the film matched that of its hero as Herzog repeatedly placed crew and actors at risk of their lives. Nonetheless, the love-hate relationship between the director and his star carried them into one last film, the uneven but still remarkable Cobra Verde, about a Brazilian bandit sent to Africa to reopen the slave trade. After Kinski's death in 1991, Herzog made a documentary, My Best Fiend, about their decades of collaboration; the result rivals their previous work as a testament to human extremity. --Bret Fetzer