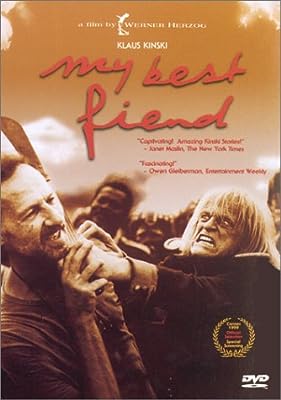 Price: $19.98
As of 2022-10-07 08:54:55 UTC (more info)
Product prices and availability are accurate as of 2022-10-07 08:54:55 UTC and are subject to change. Any price and availability information displayed on http://www.amazon.com/ at the time of purchase will apply to the purchase of this product.
Availability: Not Available - stock arriving soon
Buy Now from Amazon
Product Information (more info)
CERTAIN CONTENT THAT APPEARS ON THIS SITE COMES FROM AMAZON SERVICES LLC. THIS CONTENT IS PROVIDED 'AS IS' AND IS SUBJECT TO CHANGE OR REMOVAL AT ANY TIME.

Actor Klaus Kinski and director Werner Herzog worked together to produce the finest films of their careers-even though they nearly killed each other in the process! Their tempestuous relationship is the focus of this truly fascinating documentary. 1999/color/100 min/NR/German/subtitled.

Most people associate the director Werner Herzog with the actor Klaus Kinski--but few know how twisted and enmeshed their relationship was. Though Kinski has made dozens of movies, he probably remains best known for the five he made with Herzog: Aguirre: The Wrath of God, Woyzeck, Nosferatu the Vampyre, Cobra Verde, and Fitzcarraldo. In this documentary/cinematic memoir, Herzog uses clips from these remarkable films, on-the-set footage, and personal recollections to create a portrait of Kinski as both a deeply passionate actor and a raving lunatic; it's hard to say whether he's defaming Kinski or being generous to this mercurial, erratic actor. There's no question that their relationship is fascinating; after their first movie (Aguirre, probably the best of their collaborations) they both described moments of wanting to kill each other--in fact, both agree that Herzog threatened to shoot Kinski at one point, though they differ on the details. Yet they went on to make four more movies, almost all of them under circumstances that would be difficult for the most serene personalities. My Best Fiend was inspired by Kinski's death, and probably the movie's weakest aspect is that we don't get Kinski's side of their friendship. But even though it's one-sided, it's still a remarkable portrait of two artists who were willing to go to extremes to capture their visions. Any fan of either will find this unique documentary indispensable. --Bret Fetzer