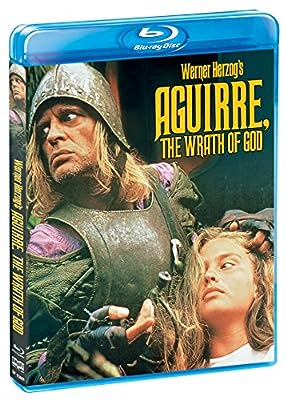 Price: $15.89
As of 2020-02-27 20:24:32 UTC (more info)
Product prices and availability are accurate as of 2020-02-27 20:24:32 UTC and are subject to change. Any price and availability information displayed on http://www.amazon.com/ at the time of purchase will apply to the purchase of this product.
Availability: Not Available - stock arriving soon
Buy Now from Amazon
Product Information (more info)
CERTAIN CONTENT THAT APPEARS ON THIS SITE COMES FROM AMAZON SERVICES LLC. THIS CONTENT IS PROVIDED 'AS IS' AND IS SUBJECT TO CHANGE OR REMOVAL AT ANY TIME.

Werner Herzog's masterpiece Aguirre: The Wrath of God, tells a story which takes place in the year 1560 about a doomed expedition led by a group of men in the Peruvian rain forest in search of the legendary city of gold, El Dorado. Klaus Kinski plays Aguirre, one of the most frightening villains ever captured on film. A man so ruthless and evil, he will let nothing and no one get in his way to retrieve his untold riches. Kinski embodies the character of Aguirre perfectly with his frightening facial expressions, his stern cold eyes and his crab spider-like walk. Kinski creates a man on the verge of madness always scheming and plotting against others and the only person Aguirre shows any tenderness or love towards is his 15-year-old daughter; which disturbingly feels incestuous.  Herzog's film unforgettably explored the haunting themes of greed, madness and lust for power, making it one of the most powerful films to explore the dark side of the human soul; and so its not too surprising it ultimately became one of the main influences for Frances Ford Coppola's Apocalypse Now.

In the mid-16th century, after annihilating the Incan empire, Gonzalo Pizarro (Allejandro Repulles) leads his army of conquistadors over the Andes into the heart of the most savage environment on earth in search of the fabled City of Gold, El Dorado. As the soldiers battle starvation, Indians, the forces of nature, and each other, Don Lope de Aguirre (Klaus Kinski), "The Wrath of God, ", is consumed with visions of conquering all of South America and revolts, leading his own army down a treacherous river on a doomed quest into oblivion.


Featuring a seething, controlled performance from Klaus Kinski, this masterpiece from director Werner Herzog is an unforgettable portrait of madness and power.

Aguirre: The Wrath of God is one of those epic masterpieces that could never be made today. The film-making process that Herzog and his cast and crew endured was grueling, risky and at times life threatening, filming on location on the Amazon River. Aguirre: Wrath of God has some of the most haunting and most dangerous sequences ever captured on celluloid which includes its iconic opening of a snake-like line of men making their way down the steep Andes mountains through a thick fog of clouds and jungle, the thrilling sequence of rafts getting caught in a horrifying and dangerous whirlpool, and the decapitation of a man plotting to escape, whose head continues to speak shortly after the man is beheaded. The making of Aguirre: The Wrath of God became as legendary to film buffs as the film itself, as right from the beginning of the production Herzog would purposely try infuriating actor Klaus Kinski to get the most frightening performance he desired out of him. Kinski's angry outbursts would result in not only a gunshot blowing off the top joint of a extras finger but rumors that Herzog had even threatened to shoot first Kinski and then himself, at a time when Kinski threatened to walk off set. Over the years this story has been given rise to the legend that Herzog made Kinski act for him at gunpoint; which later was debunked by Herzog himself.