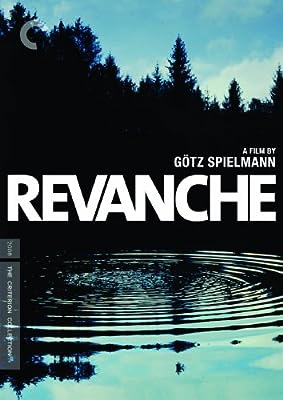 Price: $29.99
As of 2023-02-08 04:53:57 UTC (more info)
Product prices and availability are accurate as of 2023-02-08 04:53:57 UTC and are subject to change. Any price and availability information displayed on http://www.amazon.com/ at the time of purchase will apply to the purchase of this product.
Availability: Not Available - stock arriving soon
Buy Now from Amazon
Product Information (more info)
CERTAIN CONTENT THAT APPEARS ON THIS SITE COMES FROM AMAZON SERVICES LLC. THIS CONTENT IS PROVIDED 'AS IS' AND IS SUBJECT TO CHANGE OR REMOVAL AT ANY TIME.

A gripping thriller and a tragic drama of nearly Greek proportions, REVANCHE is the stunning, Oscar-nominated international breakthrough of Austrian filmmaker Gtz Spielmann. In a ragged section of Vienna, hardened ex-con Alex (the mesmerizing Johannes Krisch) works as an assistant in a brothel, where he falls for Ukrainian hooker Tamara. Their desperate plans for escape unexpectedly intersect with the lives of a rural cop and his seemingly content wife. With meticulous, elegant direction, Spielmann creates a tense, existential, and surprising portrait of vengeance and redemption, and a journey into the darkest forest of human nature, in which violence and beauty exist side by side. (studio)

Director Götz Spielmann's Revanche, Austria's 2009 Academy Awards selection for foreign film, is quite a unique movie for its sensitive, empathetic portrayal of hard-boiled activity. Its gorgeously austere cinematography not only serves this sad story well but also makes the viewing experience more touching than one would expect from such a bleak narrative. Revanche, which means in German both "revenge" and "second chance," focuses on swarthy ex-con Alex (Johannes Krisch) and his girlfriend, Ukrainian prostitute Tamara (Irina Potapenko), a tender couple who are as naive as they are streetwise. Scenes set in the Viennese brothel in which they are both employed by a sleazy boss, Konecny (Hanno Pöschl), depict a couple stranded in financial ruin and dreaming of an exit plan. Meanwhile, a second story unfolds featuring Alex's aging grandfather, Hausner (Johannes Thanheiser), and his neighbors in their small village--Robert (Andreas Lust), the local policeman, and his wife, Susanne (Ursula Strauss). When Alex and Tamara's plan goes awry, the two couples' lives intersect in drastic ways. Not until their joint story becomes more grossly intertwined do they discover how much they all have in common. Revanche is a story about a struggle to repress vengeance and about how to redeem oneself after accidents occur. The acting in this film is astoundingly real, so the guilt that each character feels is crystal clear to the viewer. Crime, here, is so realistically complex that by the end it hardly seems like a crime has been committed at all. Moreover, as each character digs deeper into their sources of loss, one understands the humanity of such dire circumstance and learns about the overlap between urban chaos and the solace of nature via Austrian farm life. The second disc on this Criterion release contains excellent interviews with this insightful, intuitive director as well as his beautifully scenic student short film, "Foreign Land," about a boy in the Tyrolean Alps who learns how to manage his family farm. --Trinie Dalton