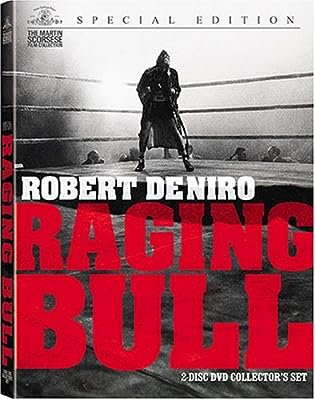 Price: $9.55
As of 2023-02-07 13:00:52 UTC (more info)
Product prices and availability are accurate as of 2023-02-07 13:00:52 UTC and are subject to change. Any price and availability information displayed on http://www.amazon.com/ at the time of purchase will apply to the purchase of this product.
Availability: Not Available - stock arriving soon
Buy Now from Amazon
Product Information (more info)
CERTAIN CONTENT THAT APPEARS ON THIS SITE COMES FROM AMAZON SERVICES LLC. THIS CONTENT IS PROVIDED 'AS IS' AND IS SUBJECT TO CHANGE OR REMOVAL AT ANY TIME.

Robert De Niro teams with director Martin Scorsese in this "extraordinarily compelling" (Leonard Maltin) film that introduced unflinching realism to stunned audiences in 1980. An "exceedingly violentas well as poetic" fight picture that maps "the landscape of the soul" (The New York Times),Raging Bull garnered eight OscarÂ(r) nominations* and won two, including Best Actor for De Niro. De Niro gives the performance of his career as Jake La Motta, a boxer whose psychological and sexual complexities erupt into violence both in and out of the ring. Joe Pesci and Cathy Moriarty are unforgettable as the brother who falls prey to Jake's mounting paranoia and jealousy, and the fifteen-year-old girl who becomes his most prized trophy. A "brilliantly photographed film of extraordinary power and rare distinction" (The Wall Street Journal), Raging Bullis filmmaking at its riveting best. *1980: Best Picture, Director, Supporting Actor (Pesci), Supporting Actress (Moriarty), Cinematography, Sound, Editing (won)

Martin Scorsese's 1980 Raging Bull has been identified in recent years as one of America's greatest films, and understandably so. Robert De Niro won a richly deserved Academy Award for portraying fighter Jake La Motta, an extremely difficult New York boxer who has to contend with his own temper and jealousy, as well as the Mob and the boxing establishment. Joe Pesci is very good as La Motta's long-suffering brother, and Cathy Moriarty made a strong screen debut as the brawler's glamorous wife. The highly contrasted black-and- white film has a richness, texture, and even sensuality about it that, together with Scorsese's amazing editing (with his Oscar-winning editor Thelma Schoonmaker) and De Niro's focused, tragic performance, is unforgettable. --Tom Keogh