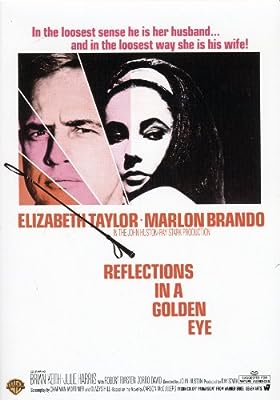 Price: $6.99
Availability: Not Available - stock arriving soon
Buy Now from Amazon
Product Information (more info)
CERTAIN CONTENT THAT APPEARS ON THIS SITE COMES FROM AMAZON SERVICES LLC. THIS CONTENT IS PROVIDED 'AS IS' AND IS SUBJECT TO CHANGE OR REMOVAL AT ANY TIME.

This dreary story of the latent desires of the sexually repressed and psychologically tormented is taken from the 1944 novel by Carson McCullers. Major Penderton (Marlon Brando) is a hard-driving Army officer married to Leonora (Elizabeth Taylor). The impotent Penderton hides his latent homosexuality under his strict military discipline, while Leonora is having an affair with Lt. Colonel Langdon (Brian Keith), who is married to the troubled Allison (Julie Harris), who slices off her own nipples after a disappointing pregnancy. Private Williams (Robert Forster) is a young recruit who likes to ride naked on horseback. The Major is driven to insane jealousy when he discovers Williams would rather be with Leonora than with him.