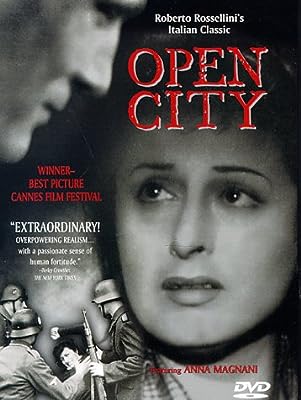 Price: $45.99
As of 2022-10-04 00:59:12 UTC (more info)
Product prices and availability are accurate as of 2022-10-04 00:59:12 UTC and are subject to change. Any price and availability information displayed on http://www.amazon.com/ at the time of purchase will apply to the purchase of this product.
Availability: Not Available - stock arriving soon
Buy Now from Amazon
Product Information (more info)
CERTAIN CONTENT THAT APPEARS ON THIS SITE COMES FROM AMAZON SERVICES LLC. THIS CONTENT IS PROVIDED 'AS IS' AND IS SUBJECT TO CHANGE OR REMOVAL AT ANY TIME.

The stars play an impoverished mother-to-be and a parish priest whose loyalties are tested by the sinister German forces that occupy their homeland during World War II.

The Allies had barely driven the Nazis out of Rome when Roberto Rosselini went to work on Open City, considered by most to be his greatest work. Shot on bits and short ends of scavenged film, this film helped define Italian neorealism. Audiences were convinced that the actors were all amateurs (they weren't) and the whole film was improvised (it wasn't; the three screenwriters included Federico Fellini). With its semidocumentary camera style and use of actual locations, the film does feel very real. Of course, so does the opening half-hour of Saving Private Ryan, and like that film Open City is at its heart a classic war yarn any Hollywood studio would feel at home with. The story involves members of the Italian underground trying to smuggle badly needed cash out of Nazi-occupied Rome to partisan fighters in the mountains, while the Nazis are hunting down one of the underground, a notorious freedom fighter and seditionist. Anna Magnani (an actor well established in her own country who became an international star with this film) is often singled out for her portrayal as the pregnant, unwed woman who gets caught up in the action on her wedding day, but the entire cast is topnotch. The sparse subtitles are both a blessing and a curse--there is less to read, which allows the viewer to concentrate on the visuals, but there are times when non-Italian-speakers will feel like they're missing out on some juicy dialogue. --Geof Miller