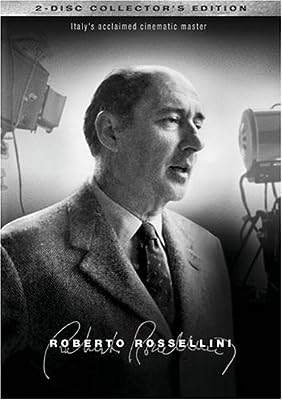 Price: $19.58
As of 2020-08-03 10:18:13 UTC (more info)
Product prices and availability are accurate as of 2020-08-03 10:18:13 UTC and are subject to change. Any price and availability information displayed on http://www.amazon.com/ at the time of purchase will apply to the purchase of this product.
Availability: Not Available - stock arriving soon
Buy Now from Amazon
Product Information (more info)
CERTAIN CONTENT THAT APPEARS ON THIS SITE COMES FROM AMAZON SERVICES LLC. THIS CONTENT IS PROVIDED 'AS IS' AND IS SUBJECT TO CHANGE OR REMOVAL AT ANY TIME.

Roberto Rossellini shot his first film at the invitation of Vittorio Mussolini, son of the Italian dictator. Even his early films had a profound effect: Rossellini was credited with launching the Italian Neorealism movement that used non-actors and real locations to showcase the plight of working-class Italians. Legendary French directors including Andre Bazin, Francois Truffaut and Jean-Luc Godard also called him the godfather of the French New Wave style. The ROBERTO ROSSELINI 2-DISC COLLECTOR'S EDITION includes two films never before seen on DVD in the U.S. DOV'E LA LIBERTA...? (WHERE IS FREEDOM?) Rossellini's darkly comic satire showcases the great Italian comic TOTO as a barber who is imprisoned for murdering his wife's suspected lover. After twenty years, Salvatore leaves the prison walls to find the world he once knew gone. Salvatore realizes he has no choice but to find a way back to prison where he feels certain he will be happier. In ERA NOTTE A ROMA (ESCAPE BY NIGHT), an emotional war drama set in Nazi-occupied Rome, a beautiful bootlegger (GIOVANNA RALLI) gives sanctuary to three escaped POWs - an American pilot, a Russian sergeant and a British major. By taking them in, she tragically jeopardizes the safety of her Communist lover while the confinement of the trapped prisoners brings their uneasy alliance to a boiling point, symbolizing the chaos of the world around them.