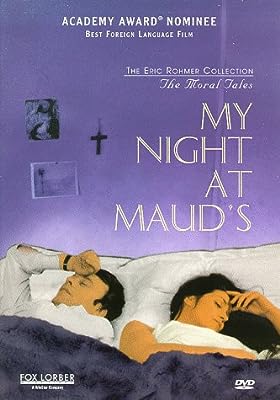 Price: $14.95
As of 2022-08-17 15:54:19 UTC (more info)
Product prices and availability are accurate as of 2022-08-17 15:54:19 UTC and are subject to change. Any price and availability information displayed on http://www.amazon.com/ at the time of purchase will apply to the purchase of this product.
Availability: Not Available - stock arriving soon
Buy Now from Amazon
Product Information (more info)
CERTAIN CONTENT THAT APPEARS ON THIS SITE COMES FROM AMAZON SERVICES LLC. THIS CONTENT IS PROVIDED 'AS IS' AND IS SUBJECT TO CHANGE OR REMOVAL AT ANY TIME.

French director Eric Rohmer, former critic and Cahiers du Cinema editor, created a very special romantic film series around the difficult choices men make when they fall in love with two women called "Six Moral Tales." My Night at Maud's was the third entry, and it was so well received in 1969 that it gave Rohmer international prominence. To this day, it remains Rohmer's masterpiece, a brilliantly insightful and sublime meditation on adult indiscretions. Jean-Louis Trintignant plays a chaste engineer who thinks he's met his soul mate in church (Marie-Christine Barrault), yet winds up accidentally spending the night with the seductive Maud (Francoise Fabian), who is more his intellectual equal. Filmed in stark black and white by Nestor Almendros, this is one of those rare films in which questions about philosophy translate into unexpected answers about the heart. It's slow and methodical, but well worth the experience. --Bill Desowitz