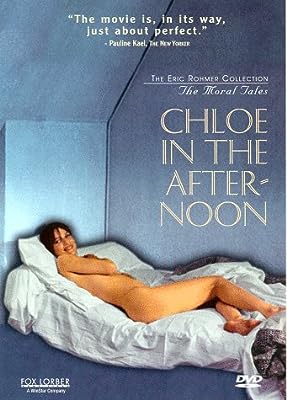 Price: $49.99
As of 2023-02-04 16:51:15 UTC (more info)
Product prices and availability are accurate as of 2023-02-04 16:51:15 UTC and are subject to change. Any price and availability information displayed on http://www.amazon.com/ at the time of purchase will apply to the purchase of this product.
Availability: Not Available - stock arriving soon
Buy Now from Amazon
Product Information (more info)
CERTAIN CONTENT THAT APPEARS ON THIS SITE COMES FROM AMAZON SERVICES LLC. THIS CONTENT IS PROVIDED 'AS IS' AND IS SUBJECT TO CHANGE OR REMOVAL AT ANY TIME.

A low-key, slightly creepy meditation on infidelity and adjustments to social expectations, Chloe in the Afternoon (1972) marks the culmination of director Eric Rohmer's "Six Moral Tales" series. The film, which traces the trajectory of Frederic, a married businessman, through temptation and an altogether standard midlife crisis, feels remarkably ham-handed, and fails to offer anything more than platitudinous responses to complex problems. Zouzou proves fetching as the title character, a bohemian drifter bent on seducing, and arguably transforming, the comfortably bourgeois protagonist (the dull-looking Bernard Verley); the rest of the cast, given indistinct characters to interpret, rarely provides much excitement. Several scenes--particularly a revelatory encounter between Frederic and Chloe in the basement of a dress shop--do manage to catch fire, but Rohmer dodges the implications of his own creative instincts and undermines his own point by grafting on a pat conclusion that feels cheap and sudden. Lost in the slide toward obviousness is a genuinely intelligent script--one that manages to feel bright without ever resorting to cleverness--and foggy-surreal location shooting in some of the less fashionable areas of Paris. Best suited for repentant philanderers and hardcore Francophiles. --Miles Bethany