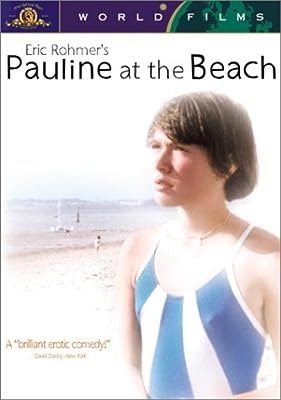 Price: $6.96
As of 2022-10-07 18:40:43 UTC (more info)
Product prices and availability are accurate as of 2022-10-07 18:40:43 UTC and are subject to change. Any price and availability information displayed on http://www.amazon.com/ at the time of purchase will apply to the purchase of this product.
Availability: Not Available - stock arriving soon
Buy Now from Amazon
Product Information (more info)
CERTAIN CONTENT THAT APPEARS ON THIS SITE COMES FROM AMAZON SERVICES LLC. THIS CONTENT IS PROVIDED 'AS IS' AND IS SUBJECT TO CHANGE OR REMOVAL AT ANY TIME.

Come take a leisurely, relaxing trip to the sun-soaked, sandy beaches of Brittany in this bewitchingly funny yet profoundly wise comedy (Vogue) from acclaimed French writer/director Eric Rohmer. Winner* for Best Direction at the Berlin Film Festival, Pauline at the Beach is delightful a film of summer sunlight, bare skin and escalating amorous misunderstandings (Newsweek). Young and beautiful Pauline is spending the end of the summer with her older and sexuallyalluring cousin Marion on the stunning Atlantic coast of France. And it isn't long before three eligible men attempt to entice them both into romance. But head games, deceit and lies soon interfere with the amorous mood, threatening to spoil this idyllic playground and Pauline's innocent views of love. *1983

In the lighthearted third film in Eric Rohmer's "Comedies and Proverbs" series, 15-year-old Pauline (Amanda Langlet) gets an eye-opening lesson in the games grown-ups play on a two-week summer vacation with her recently divorced and ready-for-fun older cousin Marion (Arielle Dombasle, every inch the vivacious blonde goddess). Smitten young Pascal Greggory turns aggressive with jealousy when the smooth, seductive, happily shallow writer Féodor Atkine wins the fancy of the "perfect" Marion while continuing to fool around on the side. The tangled affairs, mistaken identities, and white lies are the stuff of sex farce, but Rohmer is more interested in the folly of love and the impulsive, illogical workings of human nature. He deftly crafts a gentle and sexy little human comedy that ends with Pauline learning perhaps the right lessons after all. --Sean Axmaker