Eclipse Series 23: The First Films of Akira Kurosawa (Sanshiro Sugata / The Most Beautiful / Sanshiro Sugata, Part Two / The Men Who Tread on the Tiger's Tail) (The Criterion Collection) 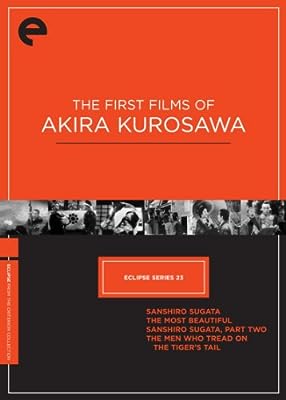 Price: $29.99
As of 2022-08-10 12:07:24 UTC (more info)
Product prices and availability are accurate as of 2022-08-10 12:07:24 UTC and are subject to change. Any price and availability information displayed on http://www.amazon.com/ at the time of purchase will apply to the purchase of this product.
Availability: Not Available - stock arriving soon
Buy Now from Amazon
Product Information (more info)
CERTAIN CONTENT THAT APPEARS ON THIS SITE COMES FROM AMAZON SERVICES LLC. THIS CONTENT IS PROVIDED 'AS IS' AND IS SUBJECT TO CHANGE OR REMOVAL AT ANY TIME.

Years before Akira Kurosawa changed the face of cinema with such iconic works as Rashomon, Seven Samurai, and Yojimbo, he made his start in the Japanese film industry with four popular and exceptional works, created while World War II was raging. All gripping dramas, those rare early films—Sanshiro Sugata; The Most Beautiful; Sanshiro Sugata, Part Two; and The Men Who Tread on the Tiger’s Tail—are collected here, including a two-part martial arts saga, a portrait of female volunteers helping the war effort, and a kabuki-derived tale of deception. These captivating films are a glorious introduction to a peerless career.

Sanshiro Sugata (Sugata Sanshiro): Kurosawa’s effortless debut is based on a novel by Tsuneo Tomita about the rivalry between judo and jujitsu. Starring Susumu Fujita as the title character, Sanshiro Sugata is a dazzling martial-arts action tale, but it’s also a moving story of moral education and enlightenment that’s quintessential Kurosawa.

The Most Beautiful (Ichiban utsukushiku): This portrait of female volunteer workers at an optics plant during World War II, shot on location at the Nippon Kogaku factory, was created with a patriotic agenda. Yet thanks to the director’s groundbreaking semidocumentary approach to the material, The Most Beautiful is a revealing look at Japanese women of the era that anticipates the aesthetics of Japanese cinema’s postwar social realism.

Sanshiro Sugata, Part Two (Zoku Sugata Sanshiro): Kurosawa’s first film was such a success that the studio pressured the director into making a sequel. The result is a hugely entertaining adventure, reuniting most of the major players from the original and featuring a two-part narrative in which Sanshiro first fights a pair of Americans and then finds himself the target of a revenge mission undertaken by the brothers of the original film’s villain.

The Men Who Tread on the Tiger’s Tail (Tora no o wo fumu otokotachi): The fourth film from Kurosawa is based on a sacred twelfth-century incident in which the lord Yoshitsune, with the help of a group of samurai, crossed enemy territory disguised as a monk. The story was dramatized for centuries in Noh and kabuki theater, and here it becomes one of the director’s most riveting early films.

Some directing debuts are tentative and unformed, as though searching for a voice--but other filmmakers have their signature style from the get-go. Ample proof of the latter is given by The First Films of Akira Kurosawa, a four-disc Eclipse set that collects the quartet of movies that kicked off the master's career. Any fan of Seven Samurai or Yojimbo would need all of 10 minutes' worth of the 1943 Sanshiro Sugata to recognize it as a Kurosawa picture: the visual attack is already there, the dynamic movement within the frame, the charged compositions, the feeling for weather and outdoor locations. Even Kurosawa's ear for ambient noise (wind or insects, for instance) is in place.

The story is a marvelous martial arts saga about a young practitioner of judo who challenges the hidebound tradition of jujitsu, a tale of action and humor. Because it was a big hit, Kurosawa was forced to make a sequel, Sanshiro Sugata, Part Two. Susumu Fujita (in retrospect, a sort of prototype for Kurosawa's discovery of Toshiro Mifune) returns to his starring role from the first film, and the sequel comes alive in the martial arts scenes, including an eerie climactic battle in the snow. The movie is marred by crude anti-American propaganda (Japan was losing the war at the time) and also has the poorest print quality of these four titles.

In between those films, Kurosawa was given an out-and-out propaganda project, The Most Beautiful, which was meant to promote worker productivity in the doomed war effort. The setting, an optics factory staffed by young women, inspired Kurosawa to take a documentary-like approach; seen today, the film seems even more melancholy and heartsick than it probably did at the time (when its message could be taken as a stoic call to sacrifice). Not one of Kurosawa's important works, it nevertheless played an important part in his life: he married actress Yoko Yaguchi shortly after shooting.

As the war ended, Kurosawa shot The Men Who Tread on the Tiger's Tail, based on a popular and oft-performed stage classic about a group of 12th-century samurai trying to sneak through a guarded mountain pass by dressing as monks. Kurosawa expanded the central situation and added the character of the nervous, talkative porter (played by the antic comedian Kenichi Enomoto)--changes that lift the material from a formal exercise into a living, breathing vision of life. The print quality here is the best in the set, even if the movie itself is limited by the studio-bound shooting, thus robbing Kurosawa of his gift for locations. But all four films were shot under difficult circumstances, and Kurosawa still managed to put his eye and his spirit into each, in unmistakable ways. While not the place to start an appreciation of this towering figure, First Films is an exciting revelation for fans. --Robert Horton