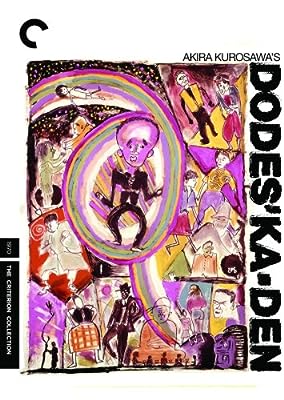 Price: $22.99
As of 2022-11-30 01:15:07 UTC (more info)
Product prices and availability are accurate as of 2022-11-30 01:15:07 UTC and are subject to change. Any price and availability information displayed on http://www.amazon.com/ at the time of purchase will apply to the purchase of this product.
Availability: Not Available - stock arriving soon
Buy Now from Amazon
Product Information (more info)
CERTAIN CONTENT THAT APPEARS ON THIS SITE COMES FROM AMAZON SERVICES LLC. THIS CONTENT IS PROVIDED 'AS IS' AND IS SUBJECT TO CHANGE OR REMOVAL AT ANY TIME.

By turns tragic and transcendent, Akira Kurosawa s Dodes'ka-den follows the daily lives of a group of people barely scraping by in a slum on the outskirts of Tokyo. Yet as desperate as their circumstances are, each of them--the homeless father and son envisioning their dream house; the young woman abused by her uncle; the boy who imagines himself a trolley conductor--finds reasons to carry on. Kurosawa's unforgettable film was made at a tumultuous moment in his life. And all of his hopes, fears, and artistic passion are on fervent display in this, his gloriously shot first color film.
SPECIAL EDITION FEATURES:
New, restored high-definition digital transfer
Akira Kurosawa: It Is Wonderful to Create, a 36-minute documentary created as part of the Toho Masterworks series, about the making of Dodes'ka-den, including interviews with director Akira Kurosawa, script supervisor Teruyo Nogami, actor Yoshitaka Zushi (who played Rokkuchan), and other members of the cast and crew
Theatrical trailer
New and improved English subtitle translation
PLUS: A booklet featuring a new essay by film historian Stephen Prince and a new interview with Nogami