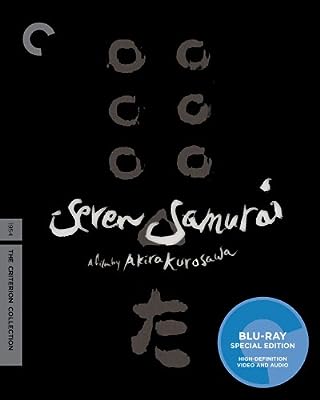 Price: $47.94
As of 2022-07-03 10:36:18 UTC (more info)
Product prices and availability are accurate as of 2022-07-03 10:36:18 UTC and are subject to change. Any price and availability information displayed on http://www.amazon.com/ at the time of purchase will apply to the purchase of this product.
Availability: Not Available - stock arriving soon
Buy Now from Amazon
Product Information (more info)
CERTAIN CONTENT THAT APPEARS ON THIS SITE COMES FROM AMAZON SERVICES LLC. THIS CONTENT IS PROVIDED 'AS IS' AND IS SUBJECT TO CHANGE OR REMOVAL AT ANY TIME.

Akira Kurosawa's action adventure classic Seven Samurai is one of the most popular and influential films in the world. Seven Samurai was the first samurai film that Akira Kurosawa had ever directed, and it was not only Kurosawa's longest film clocking in at three hours and twenty-seven minutes including an intermission; it was the longest film since 1939's epic Gone With the Wind. It was said by the critic Michael Jack that the source of Seven Samuraipioneered the action adventure genre and invented the story of a group of heroes recruiting and then training to carry out an important mission. Kurosawa once wrote in his memoirs, "There is one person, I feel, I would like to resemble as I grow old: The late American film director John Ford." Because Kurosawa's films were so heavily influenced by American westerns, he was heavily condemned by the Japanese for being 'too western' and 'old-fashioned'; which made it hard for him to find funding for most of his pictures. All the familiar ingredients of the American western can be seen at every turn in Seven Samurai. Whether it's the heroic and courageous samurai (the gunslinger), the attack of the bandits (the Indians),or the ultimate showdown in which bravery and virtue prevail in the end.

One of the most thrilling movie epics of all time, SEVEN SAMURAI (Shichinin no samurai) tells the story of a sixteenth-century village whose desperate inhabitants hire the eponymous warriors to protect them from invading bandits. This three-hour ride from Akira Kurosawa (Rashomon, Yojimbo, Ran)—featuring legendary actors Toshiro Mifune (Stray Dog, Yojimbo) and Takashi Shimura (Ikiru, The Hidden Fortress)—seamlessly weaves philosophy and entertainment, delicate human emotions and relentless action, into a rich, evocative, and unforgettable tale of courage and hope.

Unanimously hailed as one of the greatest masterpieces in the history of the motion picture, Seven Samurai has inspired countless films modeled after its basic premise. But Akira Kurosawa's classic 1954 action drama has never been surpassed in terms of sheer power of emotion, kinetic energy, and dynamic character development. The story is set in the 1600s, when the residents of a small Japanese village are seeking protection against repeated attacks by a band of marauding thieves. Offering mere handfuls of rice as payment, they hire seven unemployed "ronin" (masterless samurai), including a boastful swordsman (Toshiro Mifune) who is actually a farmer's son desperately seeking glory and acceptance. The samurai get acquainted with but remain distant from the villagers, knowing that their assignment may prove to be fatal. The climactic battle with the raiding thieves remains one of the most breathtaking sequences ever filmed. It's poetry in hyperactive motion and one of Kurosawa's crowning cinematic achievements. This is not a film that can be well served by any synopsis; it must be seen to be appreciated (accept nothing less than its complete 203-minute version) and belongs on the short list of any definitive home-video library. --Jeff Shannon

Like George Lucas's Star Wars or Peter Jackson's The Lord of the Rings; Seven Samurai is the type of film where fans can easily point out their favorite characters and favorite scenes. Of course Toshiro Mifune's character Kikuchiyo is probably a favorite among most people because of his popular attributes. He consists of being the Han Solo type character, the rebellious rogue who doesn't work for anyone and plays by his own rules. This is probably Toshiro Mifune's best performance besides Yojimbo; and his character brings a comedic spark to the already lush storyline. I personally love Takashi Shimura's performance as the samurai leader who is strong, confident, loyal and humble; which is a complete character transformation from his old withered character years earlier in Kurosawa's masterpiece Ikiru. Each samurai's distinctive personalities traits in the film, like the strong wise leader, the rebellious good-natured rogue, and the young naive apprentice; along with their own fascinating back stories, martial arts skills, and philosophies, is now a common plot device in mainstream movies, which is a standard formula that has gone all the way back since the classic heroes of comic-books, literature and folklore.