Kagemusha: The (The Criterion Collection) [Blu-ray] 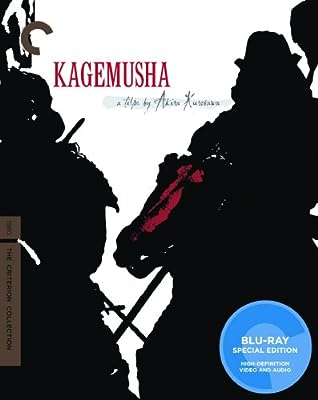 Price: $27.99
As of 2023-02-06 14:31:09 UTC (more info)
Product prices and availability are accurate as of 2023-02-06 14:31:09 UTC and are subject to change. Any price and availability information displayed on http://www.amazon.com/ at the time of purchase will apply to the purchase of this product.
Availability: Not Available - stock arriving soon
Buy Now from Amazon
Product Information (more info)
CERTAIN CONTENT THAT APPEARS ON THIS SITE COMES FROM AMAZON SERVICES LLC. THIS CONTENT IS PROVIDED 'AS IS' AND IS SUBJECT TO CHANGE OR REMOVAL AT ANY TIME.

Just as many American studio-era directors found acclaim abroad that was denied them in their home country, by 1980 Akira Kurosawa's reputation outside Japan exceeded his esteem at home. As uncompromising as ever, he found considerable difficulty securing backing for his ambitious projects. Unsure he would be able to film it, the director, an aspiring artist before he entered filmmaking, converted Kagemusha into a series of paintings, and it was partly on the basis of these that he won the financial support of longtime admirers Francis Ford Coppola and George Lucas. Set in the 16th century, when powerful warlords competed for control of Japan, it offers an examination of the nature of political power and the slipperiness of identity. For some time, Shingen Takeda Tatsuya Nakadai has been able to stay removed from the heat of battle by using his brother Nobukado Tsutomu Yamazaki as a double. As the film opens, Nobukado offers another option, having discovered a condemned thief (also pla