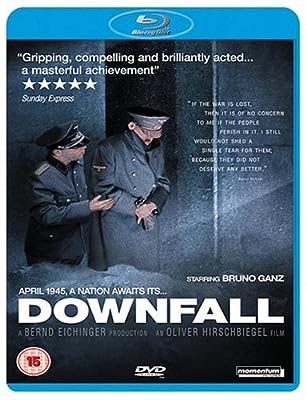 Price: $9.99
As of 2023-01-31 10:30:34 UTC (more info)
Product prices and availability are accurate as of 2023-01-31 10:30:34 UTC and are subject to change. Any price and availability information displayed on http://www.amazon.com/ at the time of purchase will apply to the purchase of this product.
Availability: Not Available - stock arriving soon
Buy Now from Amazon
Product Information (more info)
CERTAIN CONTENT THAT APPEARS ON THIS SITE COMES FROM AMAZON SERVICES LLC. THIS CONTENT IS PROVIDED 'AS IS' AND IS SUBJECT TO CHANGE OR REMOVAL AT ANY TIME.

The riveting subject of Downfall is nothing less than the disintegration of Adolf Hitler in mind, body, and soul. A 2005 Academy Award nominee for best foreign language film, this German historical drama stars Bruno Ganz as Hitler, whose psychic meltdown is depicted in sobering detail, suggesting a fallen, pathetic dictator on the verge on insanity, resorting to suicide (along with Eva Braun and Joseph and Magda Goebbels) as his Nazi empire burns amidst chaos in mid-1945. While staging most of the film in the claustrophobic bunker where Hitler spent his final days, director Oliver Hirschbiegel dares to show the gentler human side of der Fuehrer, as opposed to the pure embodiment of evil so familiar from many other Nazi-era dramas. This balanced portrayal does not inspire sympathy, however: We simply see the complexity of Hitler's character in the greater context of his inevitable downfall, and a more realistic (and therefore more horrifying) biographical portrait of madness on both epic and intimate scales.