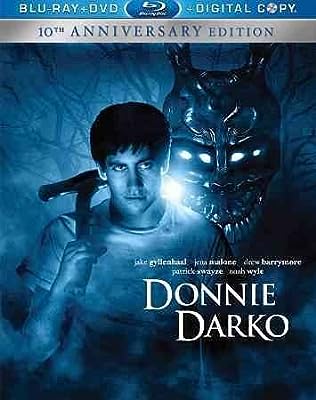 Price: $16.99
As of 2023-02-01 17:55:43 UTC (more info)
Product prices and availability are accurate as of 2023-02-01 17:55:43 UTC and are subject to change. Any price and availability information displayed on http://www.amazon.com/ at the time of purchase will apply to the purchase of this product.
Availability: Not Available - stock arriving soon
Buy Now from Amazon
Product Information (more info)
CERTAIN CONTENT THAT APPEARS ON THIS SITE COMES FROM AMAZON SERVICES LLC. THIS CONTENT IS PROVIDED 'AS IS' AND IS SUBJECT TO CHANGE OR REMOVAL AT ANY TIME.

In the tradition of Urban Legends and Final Destination, Donnie Darko is an edgy, psychological thriller about a suburban teen coming face-to-face with his dark destiny. Jake Gyllenhaal leads a star-filled cast (including Drew Barrymore, Noah Wyle, Jena Malone, Patrick Swayze and Mary McDonnell) as a delusional high-school student visited by a demonic rabbit with eerie visions of the past - and deadly predictions for the future. This "excitingly original" (Entertainment Weekly) nail-biter will keep you on the edge of your seat until the mind-bending climax.

This unclassifiable but stunningly original film obliterates the walls between teen comedy, science fiction, family drama, horror, and cultural satire--and remains wildly entertaining throughout. Jake Gyllenhaal (October Sky) stars as Donnie, a borderline-schizophrenic adolescent for whom there is no difference between the signs and wonders of reality (a plane crash that devastates his house) and hallucination (a man-sized, reptilian rabbit who talks to him). Obsessed with the science of time travel and acutely aware of the world around him, Donnie is isolated by his powers of analysis and the apocalyptic visions that no one else seems to share. The debut feature of writer-director Richard Kelly, Donnie Darko is a shattering, hypnotic work that sets its own terms and gambles--rightfully so, as it turns out--that a viewer will stay aboard for the full ride. --Tom Keogh