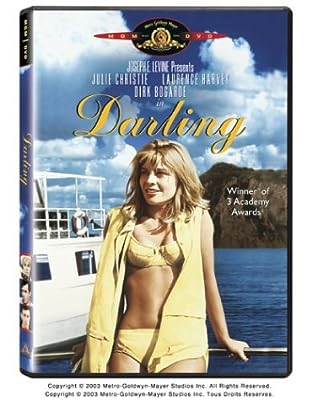 Price: $14.98
As of 2023-02-08 00:52:44 UTC (more info)
Product prices and availability are accurate as of 2023-02-08 00:52:44 UTC and are subject to change. Any price and availability information displayed on http://www.amazon.com/ at the time of purchase will apply to the purchase of this product.
Availability: Not Available - stock arriving soon
Buy Now from Amazon
Product Information (more info)
CERTAIN CONTENT THAT APPEARS ON THIS SITE COMES FROM AMAZON SERVICES LLC. THIS CONTENT IS PROVIDED 'AS IS' AND IS SUBJECT TO CHANGE OR REMOVAL AT ANY TIME.

Julie Christie turns in an astonishing, OscarÂ(r)-winning* performance in this "sensitive and stunning tale" (Cue) about wanting it alland getting exactly what you wish for. Directed by John Schlesinger from an OscarÂ(r)-winning* screenplay by Frederic Raphael, Darling is "a slashing social satire loaded with startling expositions and lacerating wit" (The New York Times). Ambitious model Diana Scott (Christie) uses her relationships to turn a low-rent career into a high-gear smorgasbord of jet-setting, love-making and the pursuit of hedonistic happiness. But as she moves from one fiery tryst with a TV writer (Dirk Bogarde) to another with a suave playboy (Laurence Harvey) and yet another with a crown prince, she finds that happiness is the one thing that may elude her forever. *1965: Actress (Christie), Original Screenplay, Costume Design

Julie Christie's miracle year of 1965 (she was also in Doctor Zhivago) was capped by a best-actress Oscar® for this sardonic take on Swinging London. Looking about as gorgeous as women get, Christie ascends the ladder of social success, trampling everybody in her path--an ascent that allows writer Frederic Raphael and director John Schlesinger to slash away at the morally bankrupt world that would enable such a person to triumph. Cynics might suggest that Schlesinger's approach, rife with the experiments of New Wave filmmaking, is nearly as empty and showy as the world it describes... which may be why this movie seems more dated than, say, Richard Lester's films from the '60s. Still, with Christie getting generous and suave support from two of the top British stars of the day, Dirk Bogarde and Laurence Harvey, Darling remains a watchable missive from a volatile era. --Robert Horton