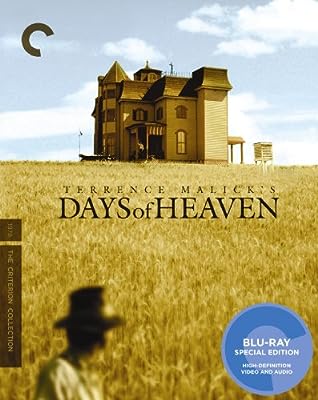 Price: $24.02
As of 2023-02-05 10:57:20 UTC (more info)
Product prices and availability are accurate as of 2023-02-05 10:57:20 UTC and are subject to change. Any price and availability information displayed on http://www.amazon.com/ at the time of purchase will apply to the purchase of this product.
Availability: Not Available - stock arriving soon
Buy Now from Amazon
Product Information (more info)
CERTAIN CONTENT THAT APPEARS ON THIS SITE COMES FROM AMAZON SERVICES LLC. THIS CONTENT IS PROVIDED 'AS IS' AND IS SUBJECT TO CHANGE OR REMOVAL AT ANY TIME.

One-of-a-kind filmmaker-philosopher Terrence Malick has created some of the most visually arresting movies of the twentieth century, and his glorious period tragedy Days of Heaven, featuring Oscar-winning cinematography by Nestor Almendros, stands out among them. In 1910, a Chicago steel worker (Richard Gere) accidentally kills his supervisor and flees to the Texas panhandle with his girlfriend (Brooke Adams) and little sister (Linda Manz) to work harvesting wheat in the fields of a stoic farmer (Sam Shepard). A love triangle, a swarm of locusts, a hellish fireMalick captures it all with dreamlike authenticity, creating at once a timeless American idyll and a gritty evocation of turn-of-the-century labor.