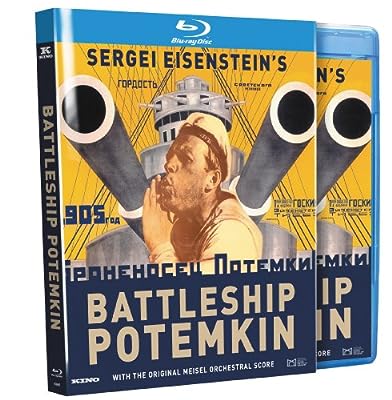 Price: $20.15
Availability: Not Available - stock arriving soon
Buy Now from Amazon
Product Information (more info)
CERTAIN CONTENT THAT APPEARS ON THIS SITE COMES FROM AMAZON SERVICES LLC. THIS CONTENT IS PROVIDED 'AS IS' AND IS SUBJECT TO CHANGE OR REMOVAL AT ANY TIME.

Soviet director Sergei Eisenstein's revolutionary propaganda silent film Battleship Potemkin is one of the fundamental landmarks in the history of the cinema. Upon its original release Battleship Potemkin was banned in it's native Soviet Union and throughout several countries because many believed the power of its images would actually incite audiences to real political violence. Eisenstein was a student of the Kuleshov school of film-making and advocate of the theories of Soviet montage, which were a series of shots that formed conflict, collision and shock, which he believed was much more effective in emotionally affecting the viewer.

Odessa - 1905. Enraged with the deplorable conditions on board the armored cruiser Potemkin and raising the red flag of revolution, the sailors' revolt becomes the rallying point for a Russian populace ground under the boot hells of the Czar's Cossacks. When ruthless White Russian cavalry arrives to crush the rebellion on the sandstone Odessa Steps, the most famous and most quoted film sequence in cinema history is born.

Eisenstein experimented with a theory called Intellectual Montage which was considered a style of editing that could form a relation or meaning between two separate images created from juxtaposition. Doing this with Battleship Potemkin, Eisenstein would manipulate the viewer in feeling sympathy for the rebellious sailors of the Battleship Potemkin and hatred for their cruel overlords. Even today, when viewing The Odessa Staircase massacre sequence with its chaotic use of editing and rhythm, it is still an emotionally draining experience for the viewer. Eisenstein's brilliant use of Soviet Montage barely gives the viewer a chance to step back and breathe, as they watch in horror as a boy is horrifically trampled to death by of a fleeing mob of people, and soon afterwards his mother is brutally executed after begging for her son's life.