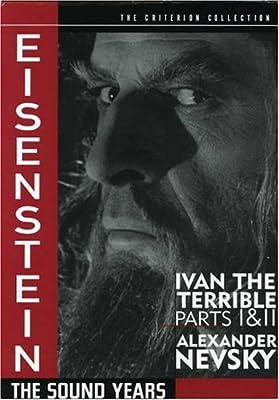 Price: $79.95
As of 2023-01-31 18:01:18 UTC (more info)
Product prices and availability are accurate as of 2023-01-31 18:01:18 UTC and are subject to change. Any price and availability information displayed on http://www.amazon.com/ at the time of purchase will apply to the purchase of this product.
Availability: Not Available - stock arriving soon
Buy Now from Amazon
Product Information (more info)
CERTAIN CONTENT THAT APPEARS ON THIS SITE COMES FROM AMAZON SERVICES LLC. THIS CONTENT IS PROVIDED 'AS IS' AND IS SUBJECT TO CHANGE OR REMOVAL AT ANY TIME.

Sergei Eisenstein, long regarded as a pioneer of film art, changed cinematic strategies halfway through his career. Upon returning from Hollywood and Mexico in the late 1930s, he left behind the densely edited style of celebrated silents like Battleship Potemkin and October, turning instead to historical sources, contradictory audiovisuals, and theatrical sets for his grandiose yet subversive sound-era work. This trio of rousing action epics reveals a deeply unsettling portrait of the Soviet Union under Stalin, and provided battle-scene blueprints for filmmaking giants from Laurence Olivier in Henry V to Akira Kurosawa in Seven Samurai.

A biography of the first czar of Russia was the final movie project of the great Sergei Eisenstein's life. It would be his undoing, as Stalin was not pleased with part II of this epic. But Ivan the Terrible, Part I still stands as a magnificent, rich, and strange achievement. This is a "composed" film to make Hitchcock look slapdash; every frame is arranged with the eye of a painter or choreographer, the mise-en-scène so deliberately artificial that even the actors' bodies become elements of style. (They complained about contorting themselves to fit Eisenstein's designs.) If you don't believe movies can be art, this could be (and has been) dismissed as ludicrous. But Eisenstein's command of light and shadow becomes its own justification, as the fascinating court intrigue plays out in a series of dynamic, eye-filling scenes. This is not a political theorist, but a director drunk on pure cinema.

Part II continues with the struggle for power and the use of secret police, a controversial segment that caused the film to be banned by Stalin in 1946 (the film was not released until 1958). The predominantly black-and-white film features a banquet dance sequence in color. Obviously the two parts must be viewed as a whole to be fully appreciated. Many film historians consider this period in Eisenstein's career less interesting than his silent period because of a sentimental return to archaic forms (characteristic of Soviet society in the '30s and '40s). Perhaps it was just part of his maturity.

Alexander Nevsky (1939), Eisenstein's landmark tale of Russia thwarting the German invasion of the 13th century, was wildly popular and quite intentional, given the prevailing Nazi geopolitical advancement and destruction at the time. It can still be viewed as a masterful use of imagery and music, with the Battle on the Ice sequence as the obvious highlight. Unfortunately, the rest of the film pales in comparison. A great score by Prokofiev was effectively integrated by the Russian filmmaker, but stands on its own merit as well.