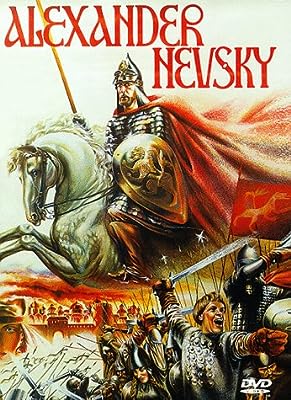 Price: $25.00
As of 2022-12-09 17:34:46 UTC (more info)
Product prices and availability are accurate as of 2022-12-09 17:34:46 UTC and are subject to change. Any price and availability information displayed on http://www.amazon.com/ at the time of purchase will apply to the purchase of this product.
Availability: Not Available - stock arriving soon
Buy Now from Amazon
Product Information (more info)
CERTAIN CONTENT THAT APPEARS ON THIS SITE COMES FROM AMAZON SERVICES LLC. THIS CONTENT IS PROVIDED 'AS IS' AND IS SUBJECT TO CHANGE OR REMOVAL AT ANY TIME.

Director Sergei Eisenstein's epic ALEXANDER NEVSKY features some of the most beautiful imagery ever put on film, a majestic music score by Prokifiev and a dazzling, climactic battle on a frozen lake. In 1242, Russia in being invaded by two sides: from the orient by the Mongols and from Europe by the Germans Teutonic Knights of the Holy Roman Empire. The last free city in Russia, Novgorod, calls the Prince Aleksandr Nevsky, who had defeated the Swedish in a previous battle, to defend the city.

Sergei Eisenstein's landmark tale of Russia thwarting the German invasion of the 13th century was wildly popular and quite intentional, given the prevailing Nazi geopolitical advancement and destruction at the time. It can still be viewed as a masterful use of imagery and music, with the Battle on the Ice sequence as the obvious highlight. Unfortunately, the rest of the film pales in comparison. A great score by Prokofiev was effectively integrated by the Russian filmmaker, but stands on its own merit as well. --Bill Desowitz