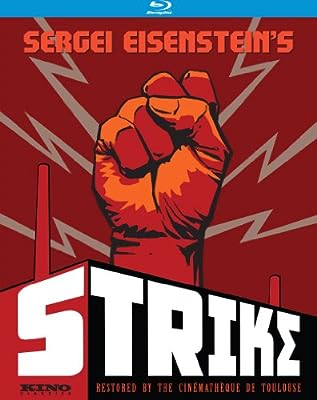 Price: $23.97
As of 2022-10-02 08:12:09 UTC (more info)
Product prices and availability are accurate as of 2022-10-02 08:12:09 UTC and are subject to change. Any price and availability information displayed on http://www.amazon.com/ at the time of purchase will apply to the purchase of this product.
Availability: Not Available - stock arriving soon
Buy Now from Amazon
Product Information (more info)
CERTAIN CONTENT THAT APPEARS ON THIS SITE COMES FROM AMAZON SERVICES LLC. THIS CONTENT IS PROVIDED 'AS IS' AND IS SUBJECT TO CHANGE OR REMOVAL AT ANY TIME.

1925's Strike was legendary director Sergei Eisenstein's first full-length feature film, and he would go on to make his masterpiece The Battleship Potemkin later that year. The film depicts a strike in the year 1903 by the workers of a factory in pre-revolutionary Russia, and explores the labourers tension, hardship and subsequent suppression which was endured by the controlling class. Soviet director Sergei Eisenstein was a student of the Kuleshov school of film-making and advocate of the theories of Soviet montage, which were a series of shots that formed conflict, collision and shock, which he believed was much more effective in emotionally affecting the viewer. Doing this Eisenstein would manipulate the viewer in feeling sympathy for the courageous workers and hatred for the corporate greedy business men.

Eistenstein's first film deals with a widespread labor strike in a rural factory and is, without doubt, one of the most astonishing debuts in film history. His introduction of dialectical montage--which included then-innovative shock cuts to such violent images as a raised club, a bloody face, and a bull's throat being cut--both disturbed and galvanized contemporary audiences. Combined with the expressionistic compositional style Eisenstein had absorbed from French and German films, it established its director as a new force in world cinema. Commissioned by the government to commemorate the first, failed Bolshevik revolution, the film covers a 1912 strike at a metalworks factory whose workers have been bullied and humiliated by the plant management. When a fired worker commits suicide, the workers organize a peaceful strike. But the plant bosses make use of agents provocateurs and eventually bring in the czar's troops, who crack down on the strikers with maximum brutality. Aside from his editing innovations, Eisenstein pioneered the concept of the collective group as a character, influenced by the example of the newly formed Soviet Union, as well as the Constructivist art of the period. FIRST TIME EVER RELEASE ON BLU-RAY FROM KINO.

Strike is most famous for a legendary sequence near the end of the film which cross-cuts with footage of the Soviet police shooting and killing civilians that are trying to retreat from them off-screen, while the scene cuts back and forth to a slaughterhouse where a butcher is holding a knife to a cow’s throat right before slaughtering it. Those two images juxtapose to form a third meaning between the cow and the civilians as the series of shots of the deceased and murdered civilians sprawled on the ground runs parallel to the cow's throat being brutally slashed open with a knife, as the cow slowly bleeds to death. Eisenstein’s theory of Intellectual Montage has the viewer make a connection between the murder of the civilians and the cow, which creates a third meaning for the viewer suggesting that the massacre of the civilians was more like a helpless slaughter. These violent and intense juxtaposed montage sequences can be looked at as the aesthetic starting point which inevitably led to other thrilling sequences, most famously with villagers ceremonially slaughtering a water buffalo in Frances Ford Coppola's war epic Apocalypse Now