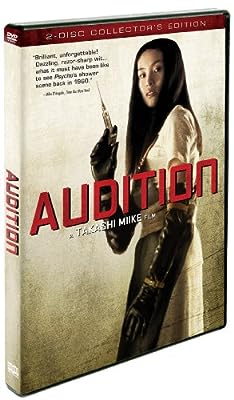 Price: $24.97
As of 2023-02-06 11:54:14 UTC (more info)
Product prices and availability are accurate as of 2023-02-06 11:54:14 UTC and are subject to change. Any price and availability information displayed on http://www.amazon.com/ at the time of purchase will apply to the purchase of this product.
Availability: Not Available - stock arriving soon
Buy Now from Amazon
Product Information (more info)
CERTAIN CONTENT THAT APPEARS ON THIS SITE COMES FROM AMAZON SERVICES LLC. THIS CONTENT IS PROVIDED 'AS IS' AND IS SUBJECT TO CHANGE OR REMOVAL AT ANY TIME.

Deceptively innocent at first, Takashi Miikes Audition finds Shigeharu Aoyama (Ryo Ishibashi, Suicide Club, The Grudge), a middle-aged widower of many years, urged by his teenage son and his film producer friend Yasuhisa Yoshikawa (Jun Kunimura, Ichi The Killer) to get out and start dating again. To help Aoyama meet women, Yoshikawa devises a plan to hold a fake audition for a leading lady. Reluctantly agreeing, Aoyama auditions 30 young hopefuls and falls for the silent beauty of Asami (model/actress Eihi Shiina), a former ballerina with a dark past. Their courtship veers from quiet romance to psycho nightmare, realizing a sadistic breach of contract between filmmaker and audience of which Hitchcock could only dream. (Richard Falcon, Sight And Sound).

Shout! Factory presents this 1999 modern horror classic in a new 1080P high-definition transfer from the internegative, with a new 5.0 digital stereo soundtrack mixed from the original audio elements. This special collectors edition includes 90 minutes of new interviews with the cast and a new audio commentary with director Takashi Miike and screenwriter Daisuke Tengan.