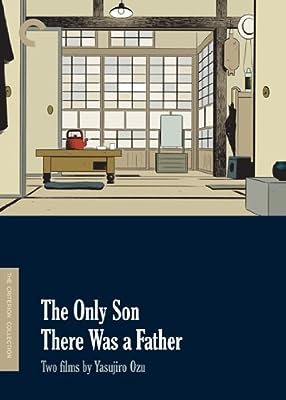 Price: $29.14
Availability: Not Available - stock arriving soon
Buy Now from Amazon
Product Information (more info)
CERTAIN CONTENT THAT APPEARS ON THIS SITE COMES FROM AMAZON SERVICES LLC. THIS CONTENT IS PROVIDED 'AS IS' AND IS SUBJECT TO CHANGE OR REMOVAL AT ANY TIME.

These rare early films from Yasujiro Ozu (Tokyo Story, An Autumn Afternoon) are considered by many to be two of the Japanese director’s finest works, paving the way for a career among the most sensitive and significant in film history. The Only Son and There Was a Father make a graceful pair, bookending a crucial period in Japanese history. In the former, Ozu’s first sound film, made during a time of intense economic crisis, a mother sacrifices her own happiness for her son’s education; the latter, released in the midst of World War II, stars Ozu stalwart Chishu Ryu (Late Spring, Tokyo Story) as a widowed schoolteacher trying to raise a son despite financial hardship. Criterion proudly presents these nearly lost treasures for the first time on home video.

Master of the domestic drama, Yasujirô Ozu honors selfless parents in this harmonious pair (both even feature similar shots of women with bundles on their backs). In 1936's The Only Son, his first sound feature, Tsune (Chôko Iida, very affecting) scrimps and saves to provide 15-year-old Ryosuke with a proper education. Twelve years later, the widow visits him in Tokyo, the same path his instructor, Mr. Okubo (Ozu favorite Chishû Ryû), once traveled, but Ryosuke (Shinichi Himori) neglected to tell her about his wife, child, and low-paying night-school job. Her disappointment melts as he proves his mettle during a family crisis. As film scholar David Bordwell notes, it's "a somber story" compared to Ozu's silent comedies.

In 1942's semi-autobiographical There Was a Father, Ryû returns as a widower with a 12-year-old son. (While the father in The Only Son barely rates a mention, Shuhei speaks about his late wife as if she were still alive.) After a class trip goes awry, he trades teaching for factory work and sends Ryohei off to boarding school. Thirteen years later, the father has advanced to an office job and the son has become a teacher, but Ryohei (Shûji Sano) regrets the time they lost even as he respects Shuhei's choices. While this World War II-era film works best on a personal level, the father's sacrifice also reflects a citizen's duty to his country.

If the quality of these prints isn't ideal, the imperfections fail to detract from the timelessness of the stories. The set comes complete with notes from Tony Rayns and Donald Richie, and interviews with Kristin Thompson, who looks at the films as precursors for Ozu's postwar classics, and Tadao Sato, who puts The Only Son into a historical context, concluding that this deceptively simple work "never fails to move me." --Kathleen C. Fennessy