When a Woman Ascends the Stairs (The Criterion Collection) 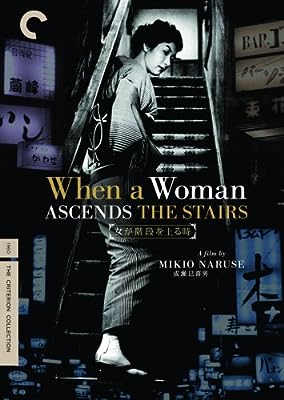 Price: $24.02
As of 2023-02-08 04:57:07 UTC (more info)
Product prices and availability are accurate as of 2023-02-08 04:57:07 UTC and are subject to change. Any price and availability information displayed on http://www.amazon.com/ at the time of purchase will apply to the purchase of this product.
Availability: Not Available - stock arriving soon
Buy Now from Amazon
Product Information (more info)
CERTAIN CONTENT THAT APPEARS ON THIS SITE COMES FROM AMAZON SERVICES LLC. THIS CONTENT IS PROVIDED 'AS IS' AND IS SUBJECT TO CHANGE OR REMOVAL AT ANY TIME.

When a Woman Ascends the Stairs might be Japanese filmmaker Mikio Naruse's finest hour - a delicate, devastating study of Keiko (the heartbreaking Takamine Hideko), a bar hostess in Tokyo's very modern postwar Ginza district, who entertains businessmen after work. Sly, resourceful, but trapped, Keiko comes to embody the conflicts and struggles of a woman trying to establish her independence in a male-dominated society. When a Woman Ascends the Stairs shows the largely unsung yet widely beloved master Naruse at his most socially exacting and profoundly emotional. (Image Entertainment)

Although its title is not instantly recognizable in the Great Movies canon, When a Woman Ascends the Stairs qualifies as a modest, graceful masterpiece. This 1959 film by Mikio Naruse has, like the director's reputation in general, slowly gained traction in the decades after Naruse's death in 1969... much like a woman quietly, discreetly walking up a staircase (the film's central and repeated image). The film considers the plight of a hostess in a goodtime-establishment in Tokyo's famous Ginza district; with her youth gone, it is now time to buy a bar of her own or latch onto a husband/benefactor. She is played by Hideko Takamine, a veteran of 17 Naruse films, whose melancholy, indomitable performance is the soul of the movie. The postwar production design is enhanced by the drinks-after-dark jazz music, which really roots in the film in an arena of almost desperate 1950s capitalism. The black-and-white widescreen photography, a jumble of slanting signs and beams and screens, fits Naruse's subtle method, which eschews big melodrama in favor of an incredibly nuanced appreciation for life's quiet disappointments. Naruse can offer no greater triumph than simply placing one's foot on a stair each night and summoning the strength to climb the staircase to work. In this film, that's enough. --Robert Horton

On the DVD
Bonus features are not extensive on Criterion's excellent disc, but they include an informative commentary track with Japanese-film guru Donald Richie and a lovely 13-minute interview with Tatsuya Nakadai, the mighty actor who was still a young up-and-comer when he played a supporting role in this film. A strong booklet includes a touching memorial essay about Naruse by leading lady Hideko Takamine and an appreciative essay by Philip Lopate, who keenly observes of the film, "[T]he preference for enlightened stoicism over glib redemption is pure Naruse." --Robert Horton

Withnail and I [Blu-ray]