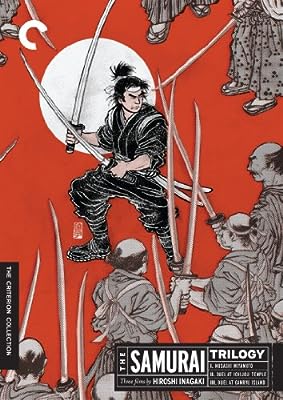 Price: $42.61
As of 2023-02-01 07:12:08 UTC (more info)
Product prices and availability are accurate as of 2023-02-01 07:12:08 UTC and are subject to change. Any price and availability information displayed on http://www.amazon.com/ at the time of purchase will apply to the purchase of this product.
Availability: Not Available - stock arriving soon
Buy Now from Amazon
Product Information (more info)
CERTAIN CONTENT THAT APPEARS ON THIS SITE COMES FROM AMAZON SERVICES LLC. THIS CONTENT IS PROVIDED 'AS IS' AND IS SUBJECT TO CHANGE OR REMOVAL AT ANY TIME.

The Samurai Trilogy, directed by Hiroshi Inagaki (The Rickshaw Man) and starring the inimitable Toshiro Mifune (Seven Samurai), was one of Japan’s most successful exports of the 1950s, a rousing, emotionally gripping tale of combat and self-discovery. Based on a novel that’s often called Japan’s Gone with the Wind, this sweeping saga fictionalizes the life of the legendary seventeenth-century swordsman (and writer and artist) Musashi Miyamoto, following him on his path from unruly youth to enlightened warrior. With these three films—1954’s Oscar-winning Musashi Miyamoto, 1955’s Duel at Ichijoji Temple, and 1956’s Duel at Ganryu Island—Inagaki created a passionate epic that’s equal parts tender love story and bloody action.