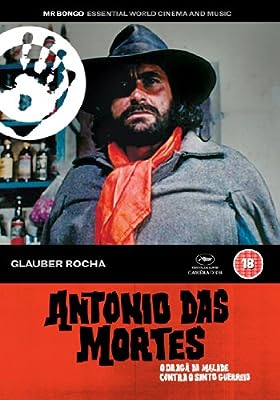 Price: $26.11
As of 2022-10-04 01:50:59 UTC (more info)
Product prices and availability are accurate as of 2022-10-04 01:50:59 UTC and are subject to change. Any price and availability information displayed on http://www.amazon.com/ at the time of purchase will apply to the purchase of this product.
Availability: Not Available - stock arriving soon
Buy Now from Amazon
Product Information (more info)
CERTAIN CONTENT THAT APPEARS ON THIS SITE COMES FROM AMAZON SERVICES LLC. THIS CONTENT IS PROVIDED 'AS IS' AND IS SUBJECT TO CHANGE OR REMOVAL AT ANY TIME.

Mauricio do Valle reprises his role as Antonio das Mortes, the troubled hitman from Black God, White Devil. A new incarnation of Cangaceiro bandits, led by Coirana (Loirival Pariz), has risen in the sertão. A blind landowner (Joffre Soares) hires Antonio to wipe out his old nemesis. Yet after besting Coirana and accompanying the dying man to his mountain hideout, Antonio is moved by the plight of the Cangaceiro's followers. The troubled hitman turns revolutionary, his gun and machete aimed towards his former masters.

Antonio das Mortes, Glauber Rocha's first film in colour, was awarded Best Director at the Cannes Film Festival of 1969 by a jury headed by Luchino Visconti. Its visual style, radical approach to story-telling and powerful use of music (by composer Marlos Nobre) has had a pervasive influence on film-makers such as Martin Scorsese and Jonathan Demme.