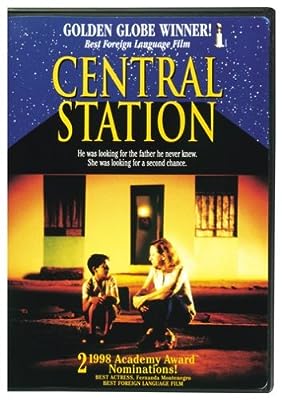 Price: $24.96
As of 2023-02-01 00:33:42 UTC (more info)
Product prices and availability are accurate as of 2023-02-01 00:33:42 UTC and are subject to change. Any price and availability information displayed on http://www.amazon.com/ at the time of purchase will apply to the purchase of this product.
Availability: Not Available - stock arriving soon
Buy Now from Amazon
Product Information (more info)
CERTAIN CONTENT THAT APPEARS ON THIS SITE COMES FROM AMAZON SERVICES LLC. THIS CONTENT IS PROVIDED 'AS IS' AND IS SUBJECT TO CHANGE OR REMOVAL AT ANY TIME.

One of the most acclaimed films of the year, CENTRAL STATION is a profoundly moving tale of the human spirit, featuring an unforgettable lead performance by Fernanda Montenegro (Best Actress Winner, National Board of Review). Inside Rio de Janeiro's bustling Central Station, two very unlikely soulsare about to become inextricably linked. When a young boy (Vinicius de Oliveira) witnesses his mother's accidental death, a lonely retired school teacher reluctantly takes the child under her wing. Although initially distrustful of each other, the two form an uncommon bond as they venture from the bustling city to Brazil's barren and remote northeast region in search of the boy's father. Together, the two embark on a journey of the heart that restores the woman's spirit and teaches the child precious life lessons. A powerful tear-jerker of uncommon grace and heart, CENTRAL STATION is destinedto become a classic.

In the opening scenes of Central Station, colorful crowds of Brazilians stream into and out of a Rio de Janeiro train, pushing through doors and windows. You're immediately pulled into the brutal vitality of a nation in motion, setting the tone for a picturesque road movie that charts Brazil's renaissance in a little boy's search for his father and an old woman's emotional reawakening. When we first meet Dora (Fernanda Montenegro), this frozen-hearted, sour-faced woman is the epitome of immobility: day after day, she sits in the train station selling her letter-writing skills to all comers, but often doesn't bother to mail these precious messages. When a woman who's paid Dora to write a pleading note to her son's long-missing dad gets run over by a bus, the child, Josue (Vinicius de Oliveira), is up for grabs. (The summary execution of a thieving street kid--in longshot--underscores the seriousness of this waif's plight.) After an abortive attempt to sell Josue for a new TV, the aspiring couch potato finds herself reluctantly propelled into an occasionally Fellini-esque odyssey through the hinterlands of Brazil's sertäo, where Dora and her sidekick find unexpected faith and family. Former documentary filmmaker Walter Salles (Foreign Land) mixes magic with realism in his appreciation of striking faces and places, but Central Station is primarily fueled by the tough/tender performances of Montenegro, Brazil's Judy Dench, and de Oliveira, an airport shoeshine boy Salles cast over 1,500 other hopefuls. (Montenegro was nominated for a Best Actress Oscar, and Central Station was in the running for Best Foreign Language Film.) No cloyingly cute child-star, de Oliveira plays Josue as a bracingly idiosyncratic brat. And watching Dora's face and soul slowly, unwillingly unclench as she gets back in motion--and emotion--is potent pleasure, even if Salles's trip does dead-end in soap opera as his Brazilian pilgrim's progress winds down. --Kathleen Murphy