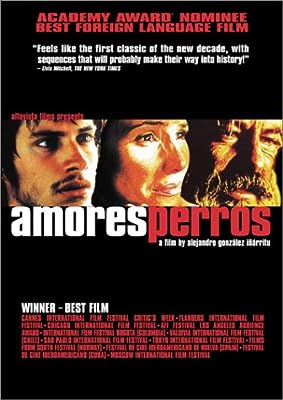 Price: $9.98
As of 2022-11-28 03:42:05 UTC (more info)
Product prices and availability are accurate as of 2022-11-28 03:42:05 UTC and are subject to change. Any price and availability information displayed on http://www.amazon.com/ at the time of purchase will apply to the purchase of this product.
Availability: Not Available - stock arriving soon
Buy Now from Amazon
Product Information (more info)
CERTAIN CONTENT THAT APPEARS ON THIS SITE COMES FROM AMAZON SERVICES LLC. THIS CONTENT IS PROVIDED 'AS IS' AND IS SUBJECT TO CHANGE OR REMOVAL AT ANY TIME.

Amores Perros roughly translates to "Love's a bitch," and it's an apt summation of this remarkable film's exploration of passion, loss, and the fragility of our lives. In telling three stories connected by one traumatic incident, Mexican director Alejandro Gonzalez Inarritu uses an intricate screenplay by novelist Guillermo Arriaga to make three movies in close orbit, expressing the notion that we are defined by what we lose--from our loves to our family, our innocence, or even our lives. These interwoven tales--about a young man in love with his brother's pregnant wife, a perfume spokeswoman and her married lover, and a scruffy vagrant who sidelines as a paid killer--are united by a devastating car crash that provides the film's narrative nexus, and by the many dogs that the characters own or care for. There is graphic violence, prompting a disclaimer that controversial dog-fight scenes were harmless and carefully supervised, but what emerges from Amores Perros is a uniquely conceptual portrait of people whom we come to know through their relationship with dogs. The film is simultaneously bleak, cynical, insightful, and compassionate, with layers of meaning that are sure to reward multiple viewings. --Jeff Shannon

The Spirit of the Beehive (Criterion Col...