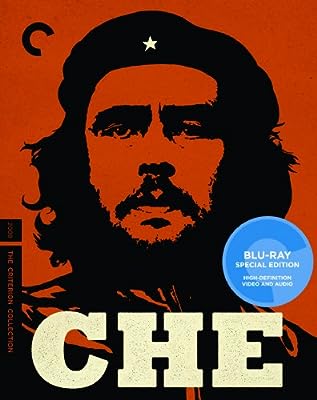 Price: $34.99
As of 2020-02-29 00:28:34 UTC (more info)
Product prices and availability are accurate as of 2020-02-29 00:28:34 UTC and are subject to change. Any price and availability information displayed on http://www.amazon.com/ at the time of purchase will apply to the purchase of this product.
Availability: Not Available - stock arriving soon
Buy Now from Amazon
Product Information (more info)
CERTAIN CONTENT THAT APPEARS ON THIS SITE COMES FROM AMAZON SERVICES LLC. THIS CONTENT IS PROVIDED 'AS IS' AND IS SUBJECT TO CHANGE OR REMOVAL AT ANY TIME.

On November 26, 1956, Fidel Castro sails to Cuba with eighty rebels. One of those rebels is Ernesto "Che" Guevara, a young Argentine idealist and doctor who shares a common goal with Fidel Castro - to overthrow the corrupt dictatorship of Fulgencio Batista. Che proves himself an indispensable fighter, and quickly grasps the art of guerrilla warfare. As he throws himself into the struggle, Che is embraced by his comrades and the Cuban people. THE ARGENTINE tracks Che's rise in the Cuban Revolution, from doctor to commander to revolutionary hero. After the Cuban Revolution, Che is at the height of his fame and power. Then he disappears, re-emerging incognito in Bolivia, where he organizes a small group of Cuban comrades and Bolivian recruits to start the great Latin American Revolution. The story of the Bolivian campaign is a tale of tenacity, sacrifice, idealism, and of guerrilla warfare that ultimately fails, bringing Che to his death. Through this story, we come to understand how Che remains a symbol of idealism and heroism that lives in the hearts of people around the world.

Lauded for its documentary approach yet also experimental in nature, Steven Soderbergh's Che spends over four hours chronicling different phases in the revolutionary career of Che Guevara (Benicio Del Toro). In Che: Part One, the successful Cuban campaign is covered, interspersed with glimpses of Guevara's camera-ready visit to New York in the Castro Revolution's aftermath. This section can't help but approximate the outline of a battle epic, despite Soderbergh's anti-romantic approach, and ends up being a stirring account of guerrilla action (it also has the bonus of Demian Bechir's uncanny impersonation of Fidel Castro). Che: Part Two jumps ahead to Che's grueling later experiences in Bolivia, where he traveled to aid the homegrown insurgents but found much less fertile ground than in Cuba. Here Guevara is--figuratively and visually--lost in the jungle, as Soderbergh reduces the characters and story to a series of factual sequences laid end-to-end. It's not Dr. Zhivago, that's for sure, although it does last longer. By spotlighting two specific sections of Che's life, Soderbergh sidesteps the less heroic aspects of his struggle, including the executions that followed the Cuban Revolution (omissions that brought criticism from anti-Castro Cubans). But the film's approach is so intentionally flat that such criticisms are almost not worth the trouble. And while Benicio Del Toro sinks into the role of the asthmatic jungle fighter with total commitment, his Guevara is an elusive protagonist, seen from a distance except for the scenes in which he's being turned into a celebrity during his NYC interlude. In short, Che is a very intriguing idea for a movie, and not a terribly engaging film. --Robert Horton