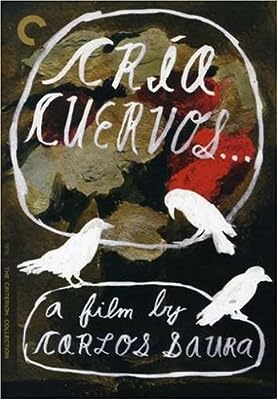 Price: $29.99
As of 2022-10-04 08:46:34 UTC (more info)
Product prices and availability are accurate as of 2022-10-04 08:46:34 UTC and are subject to change. Any price and availability information displayed on http://www.amazon.com/ at the time of purchase will apply to the purchase of this product.
Availability: Not Available - stock arriving soon
Buy Now from Amazon
Product Information (more info)
CERTAIN CONTENT THAT APPEARS ON THIS SITE COMES FROM AMAZON SERVICES LLC. THIS CONTENT IS PROVIDED 'AS IS' AND IS SUBJECT TO CHANGE OR REMOVAL AT ANY TIME.

Carlos Saura's exquisite Cria cuervos... heralded a turning point in Spain: Shot while General Franco was on his deathbed, the film melds the personal and the political in a portrait of the legacy of fascism and its effects on a middle-class family (the title derives from the Spanish proverb: "Raise ravens and they'll peck out your eyes"). Ana Torrent (the dark-eyed beauty from The Spirit of the Beehive) portrays the disturbed eight-year-old Ana, living in Madrid with her two sisters and mourning the death of her mother, whom she conjures as a ghost (played by an ethereal Geraldine Chaplin). Seamlessly shifting between fantasy and reality, the film subtly evokes both the complex feelings of childhood and the struggles of a nation emerging from the shadows.