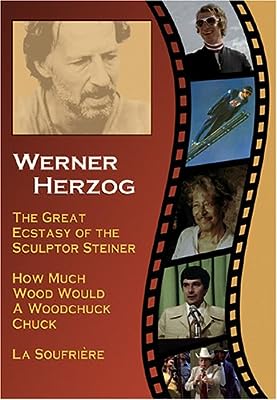 Price:
As of 2022-10-03 23:27:04 UTC (more info)
Product prices and availability are accurate as of 2022-10-03 23:27:04 UTC and are subject to change. Any price and availability information displayed on http://www.amazon.com/ at the time of purchase will apply to the purchase of this product.
Availability: Not Available - stock arriving soon
Buy Now from Amazon
Product Information (more info)
CERTAIN CONTENT THAT APPEARS ON THIS SITE COMES FROM AMAZON SERVICES LLC. THIS CONTENT IS PROVIDED 'AS IS' AND IS SUBJECT TO CHANGE OR REMOVAL AT ANY TIME.

This DVD compilation of short films by Werner Herzog offers ample proof that Herzog's documentaries are as fascinating as his feature films. Thirty years before the mainstream success of Grizzly Man, the prolific German filmmaker was creating some of his finest films, and The Great Ecstasy of the Sculptor Steiner (1975) was Herzog's first film after the strenuous production of Aguirre: The Wrath of God. A skier since childhood, Herzog had a lifelong fascination with ski-jumpers (or as they're called here, ski-flyers), and his amazement shines through in this hypnotic study of Swiss ski-jumping champion Walter Steiner, an introverted wood-carver whose ski-jumping skill was so extraordinary that he effortlessly broke all of the sport's records. Using ultra-slow-motion footage of Steiner and other ski-jumpers in flight, then landing gracefully or crashing to the ground in spectacular accidents, Herzog plays host and narrator to poetic images of beauty and danger. Herzog's uncanny faith in Steiner as an emerging champion proved amazingly prescient, and a dreamy guitar score by the German group Popol Vuh (led by longtime Herzog collaborator Florian Fricke) adds just the right touch of otherworldly magic to Steiner's breathtaking defiance of gravity.

How Much Wood Would a Woodchuck Chuck (1977) presents Herzog as a cultural observer, exploring "the poetry of capitalism" at the 1976 World Livestock Auctioneer Championship in New Holland, Pennsylvania. As Amish locals look on with equal fascination, Herzog's perspective as a foreign visitor adds a sense of wonder to the competition, in which masters of high-speed auctioneering face off in an actual livestock auction, their lightning-fast speech patterns refined after years of diligent training. On a decidedly more dangerous note, Herzog is in his "mad genius" mode in La Soufrière (1977), in which he and his gifted cameramen Ed Lachman and Jörg Schmidt-Reitwein travel to Guadeloupe, "waiting for an inevitable catastrophe" as the island's titular volcano threatens to erupt. Seizing a unique opportunity, Herzog explores a completely evacuated town, "as spooky as a science fiction locale," with starving animals roaming the streets and stores hastily cleared of their inventories. Despite looming clouds of sulfur and volcanic plumes of steam, the eruption never occurs. "We were playing the lottery," explains Herzog in the DVD's booklet of interview excerpts, and it's precisely that sense of daring adventure, and insatiable curiosity, that makes these films so timelessly engaging. --Jeff Shannon